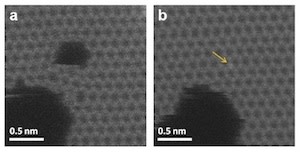 The graphene filled in the smaller hole with fresh carbon atoms

Due to their extraordinary abilities, graphene and other one-atom-thick molecules like carbon nanotubes have enormous potential for use in fields from electronics to medicine

. For example, graphene is physically strong, transparent, flexible, and a great conductor of both electricity and heat---and now the two-dimensional carbon molecule can add another power to its roster: self-healing. When researchers made holes in a graphene sheet, the molecule rebuilt its own structure

using new carbon atoms. This ability might help researchers grow graphene in large quantities and specific shapes. Physicists led by Konstantin Novoselov, who along with Andre Geim discovered graphene and won the physics Nobel Prize, trained an electron microscope at a sheet of graphene. They deposited palladium or nickel, which damage graphene by encouraging carbon bonds to break, onto a section of the sheet. When the researchers shot an electron beam at the damaged area, the beam mobilized the metal atoms to eat away at the graphene, etching nanometer-scale holes. But the holes didn’t last long: Provided with a reservoir of spare carbon atoms, the graphene incorporated the fresh carbon to patch the holes, as can be seen in the image. This rebuilding ability may help solve a serious obstacle. Graphene would be an ideal material for electronics, but it is difficult to mass-produce. The new discovery suggests that by tweaking the process, researchers could add new carbon atoms along the edges of existing sheets to grow graphene. And the etching technique---which unlike earlier methods can be performed at room temperature---will make it easy to cut those new sheets into specific shapes, bringing graphene-based electronics one step closer to reality. [via Technology Review