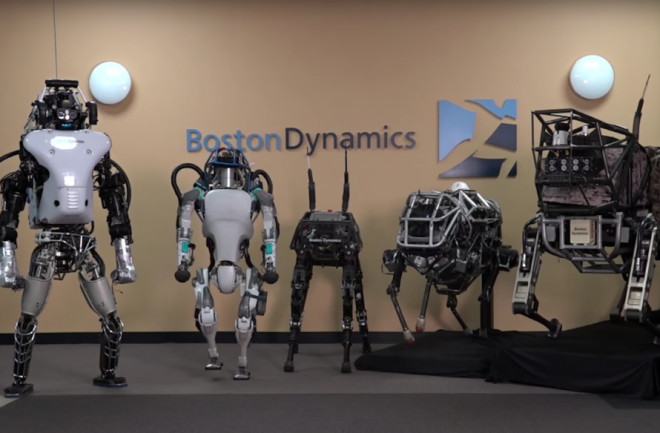 The Atlas humanoid robot stands second from the left in a lineup of walking robots. Credit: Boston Dynamics Google has not been shy about placing big bets on the future of robotics and artificial intelligence. But even the Silicon Valley giant may not feel ready to fully embrace humanoid robots and the uncomfortable questions they pose about the relationship between machines and humanity. Several robots shaped like humanoids or four-legged creatures were being developed by Boston Dynamics, a robotics company bought by Google for $500 million at the end of 2013. For years, Boston Dynamics has been famous for posting online videos showing its walking robots maintaining their balance despite being kicked and shoved by the company's human employees. One of the latest videos of the Atlas humanoid robot, published in February 2016, triggered a slew of YouTube comments that described the robot as "terrifying" or referenced Hollywood's "Terminator" films about an artificial intelligence called Skynet destroying humanity. Such reactions apparently made Google's public-relations team wary of wading into the online debate, according to Bloomberg News. "There's excitement from the tech press, but we're also starting to see some negative threads about it being terrifying, ready to take humans' jobs," wrote Courtney Hohne, a director of communications at Google and the spokeswoman for the Google X lab, in emails posted to an internal Google forum. Hohne also suggested that colleagues should "distance X from this video" to avoid triggering additional media speculation. "We're not going to comment on this video because there's really not a lot we can add, and we don't want to answer most of the Qs it triggers," she wrote. https://www.youtube.com/watch?v=rVlhMGQgDkY The same

story revealed that the Google parent company, Alphabet Inc., has decided to put Boston Dynamics up for sale. The decision had more to do with the fact that Boston Dynamics' walking robots seemed unlikely to lead to a commercial product within the next few years, according to sources interviewed by Bloomberg News. (A Boston Dynamics "robotic mule" called LS3 was recently turned down by the U.S. military after field tests with U.S. Marine foot patrols.) Still, it's intriguing to get a glimpse of how Google is attempting to deal with the public perceptions and attitudes toward the rise of robots and artificial intelligence (AI). Some of the negativity comes from experts having long predicted that robots and AI could become disruptive economic forces that may eliminate the need for certain human jobs. Lifelike robots may cause uneasiness in part because their growing capabilities evoke countless science fiction stories of machines surpassing humanity. Robots with increasingly lifelike forms and movements may also make people uncomfortable because of the so-called "uncanny valley" phenomenon. In 1970, Japanese roboticist Masahiro Mori first discussed the idea of the uncanny valley to describe the psychological discomfort of seeing figures that appear almost human but not quite. But human reactions to robots go well beyond just fear or discomfort. The closer future robots get to the human form, the greater the chance for humans to empathize with the machines or even fall in love with robots. Nobody appears to have fallen in love with Boston Dynamics' Atlas humanoid robot. Yet many YouTube comments expressed sympathy for the robot as they perceived the machine being pushed around and "bullied" by the humans.

That outpouring of sympathy for the Atlas robot even spawned a few parody videos that dubbed new voices over the Boston Dynamics video. The "Auralnauts" YouTube channel made a video that depicts Atlas as a box-loving robot bullied by its human creators. https://www.youtube.com/watch?v=sAmyZP-qbTE A second parody YouTube video turns Atlas into a foul-mouthed humanoid robot swearing at its human overseers. https://www.youtube.com/watch?v=zkv-_LqTeQA Google may no longer have to worry about public relations for humanoid robots if it succeeds in selling Boston Dynamics to another company. But the tech giant still faces similar challenges in making the public feel comfortable with its self-driving robot cars. Such driverless vehicles hold the promise of potentially reducing traffic gridlock and making the roads safer in the future. But first, Google and other companies must win the hearts and minds of both drivers and pedestrians alike.

It's probably no accident that one of Google's prototype robot cars has a "face" resembling that of a cuddly koala.