Algae promises cheaper biofuels that could power everything from jets to cars. 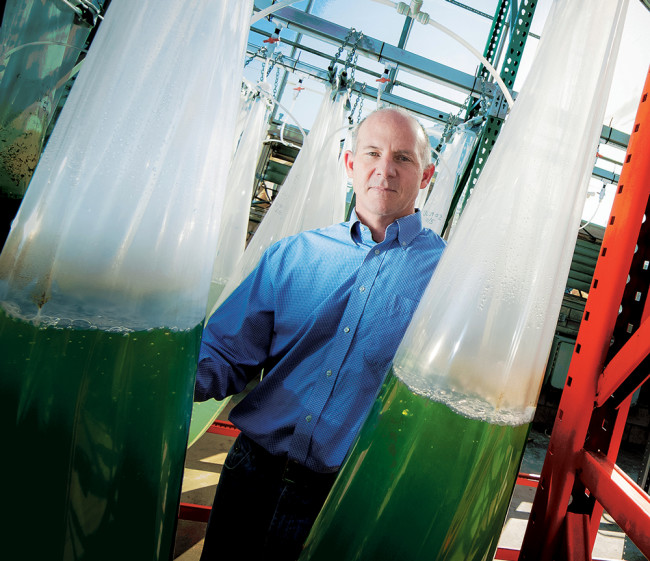 In 2009, a Boeing 737 powered partly by algae took off from Houston and circled over the Gulf of Mexico. The 90-minute test flight was a success, bolstering hopes that algae biofuels, which emit much less carbon than standard gasoline and diesel, could soon power everything from jets to cars. But scientists have struggled to find a way to produce and process algae cheaply enough to compete with petroleum fuel. Now, thanks to advances in genetic engineering, filling up your car with algae-derived biofuel is a step closer to reality.

The simplest way to make biofuel from algae is to essentially wring out the natural oils and refine them, much like petroleum. Genetic engineering can make this process more efficient. For example, scientists with the Scripps Institution of Oceanography figured out how to curb an enzyme that breaks down the lipids in algae that are crucial for making biofuel. Typically, algae growers “starve” the algae to boost lipid production, but that inhibits growth. The genetically engineered algae can grow quickly while still accumulating lots of lipids.

Algae can also be used for biomanufacturing: Microscopic algae are turned into a living machine that can be genetically programmed to produce molecules like lipids and hydrocarbons ideally suited for biofuels.

“If you just squeeze the oil out of algae, what you basically get is vegetable oil, which you can convert to diesel,” says Stephen Mayfield, a molecular biologist at the University of California, San Diego. “But because we have complete control of genetics now, we have all the technology to make [algae into] some kind of fancy photosynthetic machine.”

For now, Mayfield is using genetically engineered algae only to make drugs and nutritional supplements. But if oil prices rise enough for algae fuels to be cost effective, scientists hope to use what they’ve learned from that process to make biofuels that are both clean and profitable.

[This article originally appeared in print as "Engineering Algae to Make Better — And Cheaper — Biofuel."]