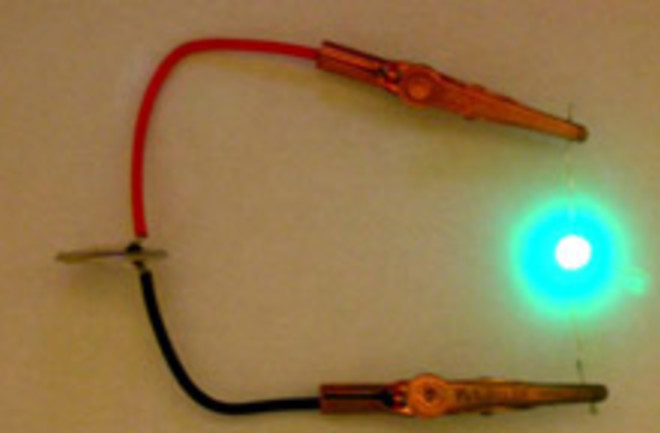 The latest advance in battery technology comes from viruses working on the nanoscale. Researchers have

constructed a lithium-ion battery, similar to those used in millions of devices, but one which uses genetically engineered viruses to create the negatively charged anode and positively charged cathode [BBC News].

The tiny workers are bacteriophages, viruses that infect bacteria but are harmless to humans. Three years ago, the same researchers created viruses that collected negatively charged particles of cobalt oxide and gold, which "grew" on a film to create the anode. Now, the researchers have added to that achievement, tackling the trickier task of making cathodes.

The work was more difficult because the material had to be highly conductive in order to be effective and most candidate materials for cathodes are highly insulating [BBC News].

engineered viruses that coat themselves with iron phosphate. Then they then latch onto carbon nanotubes to create a network of highly conductive material [ComputerWorld].

Iron phosphate is generally not a good conductor, but its properties change when it's organized on the nanoscale. In the study, reported in the journal Science, researchers say that the technology is suitable for a wide range of commercial applications.

"It has some of the same capacity and energy power performance as the best commercially available state-of-the-art batteries," [lead researcher Angela] Belcher said.... "We could run an iPod on it for about three times as long as current iPod batteries. If we really scale it, it would be used in a car," she added. Such scaling is not even close, Belcher cautioned [Reuters].

Belcher says that her viral assembly line has some advantages over traditional techniques.

"The advantage of using genetics is that things can be made better and better.... You are not stuck with a particular material; you have selection and evolution on your side" [BBC News]

, she says. In their experiments, Belcher's team created viruses with billions of variations, and then used the survival-of-the-fittest principle to select those that best performed their tasks. One sticking point, she explains, was finding a virus that could latch onto carbon nanotubes.

"That was the hardest part, since only two out of a billion viruses--each with a different genetic code and selected by the survival-of-the-fittest principle--picked up a nanotube on its tip" [EETimes]