Developing nations often have a lack of medical facilities but good cell phones. The CellScope turns the latter into the former. 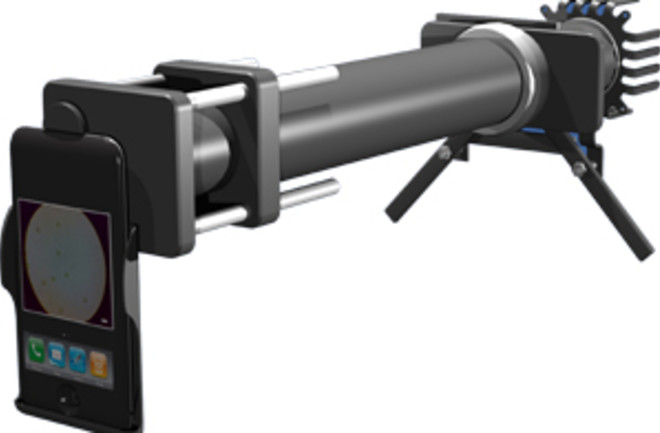 Many regions of the developing world exist in a strange technological limbo. Places that are well served by advanced cellular phone networks may lack the modern medical facilities necessary to diagnose and treat serious illness. As a result, a remote village in, say, South Africa—a region hard hit by malaria, tuberculosis, and HIV/AIDS—might be able to contact top medical experts and yet have no way to apply their knowledge.

Researchers at the University of California at Berkeley are bridging the gap with the CellScope, a microscope that attaches to a camera-equipped cell phone and produces two kinds of imaging, called brightfield and fluorescence microscopy. The CellScope can snap magnified pictures of disease samples and transmit them to medical labs across the country or around the world. The goal is to use mobile communications networks as a cost-effective way for medical personnel to screen for hematologic and infectious diseases in areas that lack access to advanced micro­scopic equipment.

Scientists have demonstrated the CellScope’s potential in two types of test case. They have used white light to image the red blood cells of sickle-cell anemia and the parasite that causes malaria. They have also used an LED and fluorescent dye to identify tuberculosis bacteria in sputum samples. Fluorescence is increasingly being touted as the future of clinical imaging due to its selectivity. In fluorescence microscopy, certain specimens, such as TB bacteria, can be dyed so that they emit light when exposed to ultraviolet radiation. To date, only a few diseases have been examined using fluorescent dyes, but David Bres­lauer, co-lead author of the study and a graduate student in the UC San Francisco/UC Berkeley Bioengineering Graduate Group, says that medical researchers are likely to target more and more pathogens this way as fluorescence microscopy becomes more widely adopted.

The CellScope tests were conducted using an off-the-shelf 3.2-megapixel cell phone. According to Breslauer, anticipated improvements in cell phone image sensors will boost the amount of information carried by each photo. Rather than having to take 50 pictures to provide adequate data for diagnosis, field workers may soon be able to capture enough detail in five. Boosts in processing power will improve productivity too, allowing software in the phone to facilitate on-site diagnosis.

Clinical and field trials of Cell­Scope will continue into 2010. Shrinking the device into a package that is compact and rugged enough for remote use will require significant strides in manufacturing. But the interest is there, and not just from the medical world: Agricultural experts have spoken with the Berkeley researchers to see if their technology could be used remotely to detect crop diseases.

The color of an LED is chosen according to the fluorescent dye applied to the specimen. To test for the presence of TB bacilli, for instance, researchers use a high-power blue LED to illuminate the sample. After the light passes through the sample and the objective lens, an emission filter blocks all light except for that emitted by the green fluorescent dye specific to the TB bacilli. The green-glowing microbes are then easily detectable against the dark background. To detect malaria parasites, for which a reliable fluorescent dye has not been developed, the LED and two filters are removed and researchers use conventional light, or bright­field, microscopy to illuminate the sample. CellScope prototypes have achieved effective magnification of 28× and spatial resolution of 1.2 microns, sufficiently detailed for screening and diagnosis of these common diseases.