Future Cities Could Be Designed for Drone Delivery 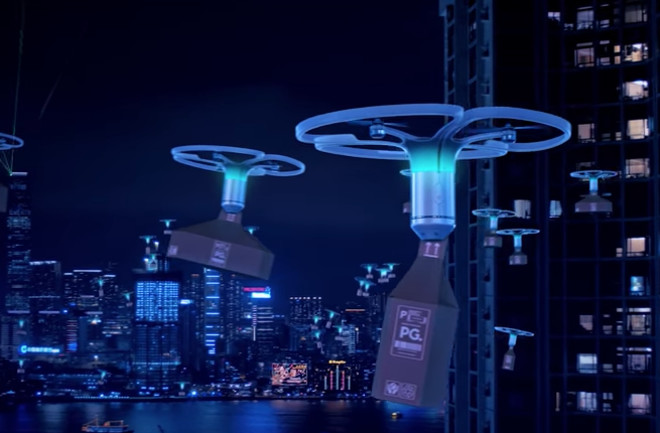 These could be the delivery drones of the future. (Credit: YouTube/Denzeen) When you think of drone delivery, what comes to mind? Pizzas falling from the sky, crowded skies or maybe you just don’t think it’ll ever happen? No matter the case, a new video shows what a future with delivery drones might look like. PriestmanGoode, an industrial design agency based in London, released the trailer for "Elevation" — a film of a drone delivery concept — at the GREAT Festival of Innovation in Hong Kong earlier this week. The delivery system, called Dragonfly, is seamlessly integrated into the cities of the future and serves as the main method of delivery. https://www.youtube.com/watch?time_continue=2&v=EZ4uczr19io The robo-carriers tote packages across a city that's been designed for them, much as the infrastructure of today is built for cars. The drones take off from boats, pick up and transfer packages while flying, and dock on the side of the buildings. “We wanted to create something that is non-threatening and which would enhance cityscapes,” said co-founder Paul Priestman in a press release. “This will be important in gaining public support for the future commercial use of drones.” Yes, it's just a concept video, but some of these ideas have been patented by big tech companies. Amazon already thought that drones might need a place to recharge or exchange packages, patenting drone perches that could be installed on electric poles and other tall structures in a city. The company also foresees the need for mobile maintenance facilities that could include boats. Of course, those are all just ideas. But remember, that's how everything starts. The full, 20-minute short film "Elevation" will be released in May.