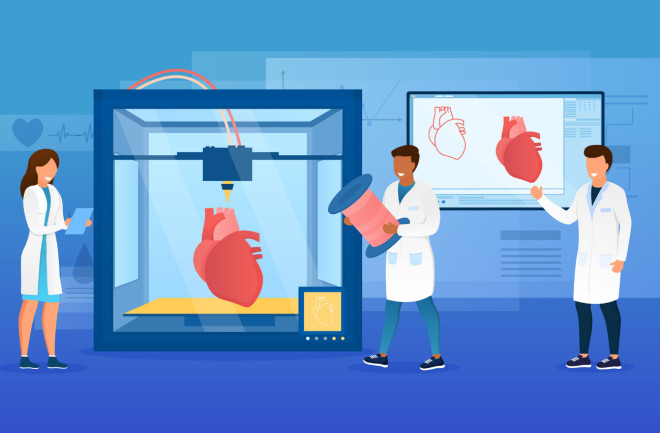 For as long as we have imagined the future of medical technology, we have toyed with the idea of replacing missing or no-longer-functioning body parts. In the final scene of 1980’s Star Wars movie The Empire Strikes Back, for example, Luke Skywalker receives an indistinguishably lifelike prosthetic hand from a fussy medical droid. Now, we are closer to realizing that vision than ever before (although, likely without the fussiness).

Over the past decade, medical professionals and researchers have adopted additive manufacturing technologies, more commonly known as 3D printing, to make great strides in their respective fields. The process has been used to create prosthetics, custom orthopedic implants, patient-specific anatomical models and surgical cutting guides. And as researchers and bioengineers busy themselves with expanding the realm of possible applications, surgeons and doctors have begun to use the technology at the point of care.

For many, it has proven to be an invaluable tool.

David Zopf straddles the line between scientist and doctor; as an affiliate professor at the University of Michigan, he conducts research at the intersection of biomedical engineering and 3D printing. And as a pediatric surgeon there, he works with children born with malformations of the head and neck.

In 2019, a 9-year-old boy with cerebral palsy — a group of disorders that affect movement and posture — came to his practice. His breathing was extremely labored, and his parents had tried and failed to alleviate the issue with other specialists. “These children will work really hard for every breath,” Zopf says. “It’s almost like they’re snoring when they’re awake.”

The boy lacked the muscle tone to keep his upper airway from spontaneously collapsing; every inhalation was a struggle between his lungs and throat muscles. What he needed was a simple device to prop the airway open, so Zopf took careful measurements and then drew up a design for a 3D-printed device that would bypass the obstruction.

Days later, he implanted a prototype into the boy's throat. “There was immediate improvement,” Zopf says. “His eyes got wider and I saw him smile. He took a deep breath of air — that struggle for every breath was relieved.”

3D printers have long been lauded for their “rapid prototyping” capability. Engineers can quickly produce one-off iterations of a device and tweak them as issues arise. In the medical space, the same qualities allow doctors to quickly produce devices that are customized to a patient's anatomy at a relatively low cost. Once a practitioner has access to a 3D printer, the marginal cost of producing a device is often no more than a few dollars.

By 2018, associate professor of orthopedic surgery Alexis Dang had already accrued more than 5 years of experience using 3D printers at the University of California San Francisco. He used the devices to manufacture implants and braces to be tested on rodents with fractured bones and fused spines. But he had yet to implement the devices in his clinical work at the San Francisco Veterans Affairs Medical Center.

That changed when a patient came in with an unusual malady. The 28-year-old veteran was plagued by chronic shoulder pain, but upon careful examination, Dang determined that the cause was a poorly-healed clavicle. The patient had fractured his collarbone as a teenager and allowed it to heal naturally, but now he was paying the price: The bone shortened during the healing process, causing the man’s posture to pitch forward crookedly and interfering with his current work as a professional photographer.

Dang decided on a procedure that was both unusual and unpredictable. He would make a diagonal cut across the man’s clavicle, allowing the surgeon to slide the two halves of the collarbone in opposite directions and ultimately lengthening the bone while maintaining contact between the two sections. Then, he would fix the sections together using an alloy plate.

“It would have been incredibly difficult to figure out mid-surgery because you kind of have to guess how things are going to move based on how you cut the bone,” Dang says. Using data from a CT scan, he 3D printed a life-sized replica of the veteran’s clavicle. He and his team then experimented with different cut angles and plate sizes until they found the best solution. “[Once] we knew where to make our cut and where to put the plate,” Dang says, “it became a relatively routine surgery.”

More frequently, replicas are shown to patients to help explain procedures. In 2015, Zopf diagnosed a 15-year-old boy with an abnormal tissue growth, called a polyp, that was creating pressure between his left eye and brain. To help the patient visualize the issue, he printed an exact replica of the tumor out of plastic.

“The fact that the patient was able to see the extent of the tumor and where it was positioned, it really provided another level of informed consent,” Zopf says.

While surgical modeling has proved incredibly useful, plastic replicas are a far cry from the sci-fi vision of functional, manufactured body parts. This fantasy, however, is closer to reality than you might imagine.

“I think it will take at least 10 more years until we can print a full-sized, functional human heart that can be transplanted,” says Tal Dvir, the driving force behind the Laboratory for Tissue Engineering and Regenerative Medicine at Tel Aviv University in Israel. “But I definitely think this is the future of medicine. We will create organs in the lab and transplant them.”

In recent years, this new scientific field has emerged at the intersection of stem cell research, 3D printing and medicine. In 2019, Dvir’s team bioprinted the first ever human heart, albeit one that was the size of a grape. The researchers began by taking a biopsy of a lucky volunteer’s stomach fat, then separated cells from extracellular fluid. They reprogrammed the cells to become pluripotent stem cells, capable of dividing into several different cell types, and then differentiated them yet again as either cardiac or endothelial tissue.

Once the research team had these building blocks, they loaded them into a multi-material 3D printer and watched as the machine rearranged the biological components into the shape of a tiny human heart — complete with blood vessels, arteries and veins.

To this day, bioprinting has remained a speculative, research-based field. But, as issues arise, scientists find a way forward. When stem cells kept dying outside a living body, a team at Harvard developed a technique to 3D print vascular channels into dense, cellular matrices. When bioprinted structures routinely collapsed due to poor structural integrity, a team of researchers at Tel Aviv University developed a polymer that could be added to the “bioink” to increase its strength.

According to Dvir, two sticky problems remain major roadblocks to realizing a vision of bioprinted human tissue. The first is practical: Once an organ is printed, how do researchers train it to function with reliable vigor? The second is the complex issue of how to regulate the technology once it becomes viable. “With any new medical technology, it's a long process working with the FDA to ensure that it's going to be as safe as possible with minimal risk,” Zopf says.

Nonetheless, proponents remain hopeful that 3D printers will soon be able to construct a liver from a patient’s thigh fat or print healthy skin for a burn victim. Unlike Luke Skywalker’s hand, these tissues won’t rely on wires and circuits. They’ll be the real thing.