A new NASA project is preparing to bring supersonic tech back into the limelight. 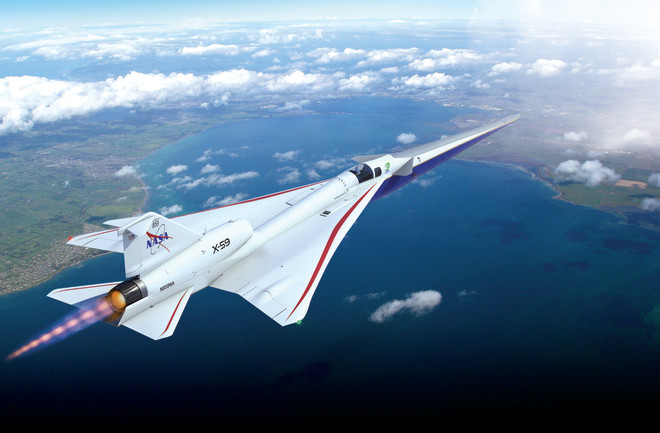 What if you could travel from one side of the country to the other in less than half the time it takes today? With the power of supersonic flight — planes that can fly faster than the speed of sound — such a fantastic notion could soon become a reality.

Through NASA's latest experimental project, is the X-59 aircraft, the agency aims to bring supersonic technology back into the forefront of the commercial airline industry.

The capability needed to surpass the sound barrier has typically only been relegated to research and military vehicles, like fighter jets.

Yet, with Chuck Yeager’s first record-breaking flight 75 years ago, there have been several attempts to introduce the technology into the commercial sector of the airline industry. And the most famous was the Concorde.

Built in the late 1970s, the supersonic airliner was ahead of its time in that the plane could shatter speed records as it raced back and forth across the Atlantic. But while fast-flying passengers soared all over the world, those still on the ground were left to deal with the destruction wrought by startling sonic booms, loud thunder-like noises that have been known to break glass, shake buildings and cause no small amount of property damage.

“Anything supersonic flying over land, it's going to create basically a carpet of sonic boom over everywhere that it goes,” says Christopher Combs, an assistant professor of aerodynamics at the University of Texas at San Antonio. “That can be, [as] we've seen very loud [and] disturbing to people in their homes.”

Because sound waves can travel through the air, when a craft flies at or above the speed of sound, air molecules near the wings are disturbed and unable to move out of the way quickly enough. This creates a pressure wave that combines and propagates, creating a continuous shockwave that follows behind the plane for the duration of its flight path.

Years earlier, public fears over the disruptive nature of the booms had already led the Federal Aviation Administration to prohibit coast-to-coast flight. But once the Concorde was decommissioned (in part due to how costly it became to fly) in 2003, the worry was enough to end the revival of supersonic passenger travel.

Combs also notes that while cost and noise had both been factors, many of the issues surrounding supersonic technologies revolve around efficiency, because “when you're going at that speed, you're not burning fuel as efficiently.”

Despite these hang-ups, NASA’s goal with X-59 is to create a supersonic vehicle that can transform those once-destructive sonic booms into barely noticeable sonic thumps.

Nearly 100 feet long and 30 feet wide, the craft’s unique shape creates a quieter cruise. It allows it to spread out the shockwaves, which prevents the waves from coalescing as they reach the ground. Unlike a typical plane, X-59’s high-thrust engine sit atop the craft to direct away noise from the wandering public below.

By tailoring the plane’s volume and lift, the aircraft's sound from above will only echo as loud as the slam of a car door, nigh undetectable by busy bystanders, says Dave Richwine, the deputy project manager for technology on the Low Boom Flight Demonstrator project which oversees the development of the X-59.

“You're going to hear something like a heartbeat,” Richwine says. “Or you may not even hear it at all if you’re in a loud environment like the city.”

By removing these barriers, the agency hopes to usher in a new era of civilian air travel. By now, experts have also realized that demand for the technology exists, and trading in our current domestic flights for more efficient ones could help improve passengers' declining expectations of the airline industry.

Of the X-59 mission’s three phases, the plane is currently still in its first, as NASA engineers continue to test its performance, as well as its safety. For example, because the plane’s nose is so long and angular, pilots can’t see out of the front window. Instead, they'll have to use NASA’s eXternal Vision System (XVS), a combination of sensors and computers and HD displays, to ensure they can navigate the skies safely.

Even so, Richwine says that NASA hopes to have the airplane flying by the end of this year. Once operational, the second phase involves the agency choosing a select number of communities to fly the plane over to test its ability to fly quietly in an array of different conditions.

As an experimental aircraft, X-59 will never carry passengers during its own lifetime, but the data it collects during the second phase of tests could be used to set new sound-based rules and regulations for U.S and international aircraft. The mission’s potential success could be just the push future aircraft developers need to help get supersonic technology cleared for commercial travel.

Yet, Richwine imagines that as the decades go on and supersonic technology becomes more mainstream, travelers could buy a ticket and find more joy in their journeys than they do today.

“It'll make a difference,” Richwine says. “If [we] could be flying on an airplane 20 years from now, and that flight only lasts half the time. That sure would be nice.”