Fantastic Plastic Changes Color When It's Stretched to the Breaking Point 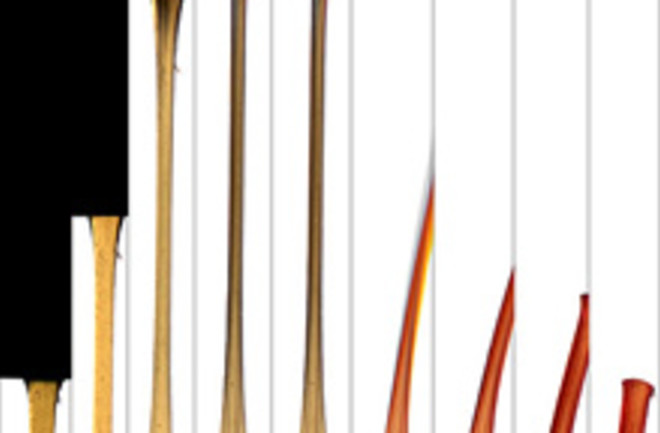 Wouldn't it be useful if an aging, weakening bridge started to turn red as a warning to structural engineers? That's the potential inherent in a new invention from a team of chemists and materials scientists, who created a plastic that turns red when it's exposed to stress.

Ultimately, such color-changing polymers could be used as coatings on everything from bridges to airplane wings, alerting engineers when vital structures are near failure [ScienceNOW Daily News].

small ring-shaped molecules that they call "mechanophores" in the center of polymer chains. In response to mechanical force, these rings break, changing the color of the polymer [ScienceNOW Daily News].

In the study, published in Nature, lead researcher Nancy Sottos tested the stretchy plastic material her team had created,

which stretched about as much as a Stretch Armstrong doll, by pulling on it until it broke. The bright red color appeared a few seconds before the material snapped, suggesting the molecules acted as an early warning sign that the material had incurred damage. In another test, the researchers mimicked repetitive stress by repeatedly stretching and relaxing the soft polymer. “After a few cycles of that, we got this brilliant color change in the material, without it breaking,” Sottos says [Science News].

But the color change was not permanent, and exposure to light or heat can interfere with the reaction. Researchers say this was a proof of concept experiment that demonstrates how far they have to go before the technology can be used in practical applications. However, they can't help speculating on how such a material could be used:

Sottos says the material could eventually be used to make solid objects including rollerblade wheels, thin films such as coats of paint, or even thin fibers that could turn red when tiny deformations develop [Science News].

Those fibers could potentially be woven into climbing ropes and parachute cords, two lifelines that can snap unexpectedly. Beyond sensing stress, researchers say that a

mechanoresponsive material would have many applications beyond being a simple force sensor. One can imagine a polymer that provides structural reinforcement once it experiences too much stress, or a material that can release a drug when it suffers a certain level of pressure [Ars Technica].