Europe's Plan to Draw Solar Power From the Sahara Moves Ahead 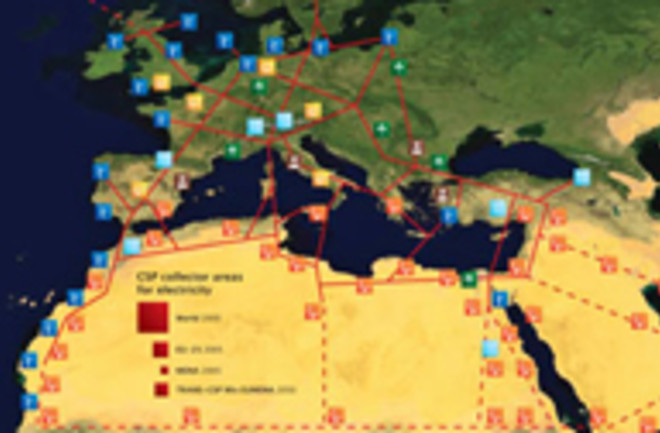 When European Union officials first discussed the idea of a massive solar power plant in the Sahara to provide power to all of Europe, many people took it as a thought experiment, a plan that was far too outlandish to ever come to pass. But now a band of alternative energy companies have announced the formation of a consortium dedicated to pushing the project ahead.

The Desertec Industrial Initiative (DII) aims to provide 15% of Europe’s electricity by 2050 or earlier via power lines stretching across the desert and Mediterranean sea. The German-led consortium was brought together by Munich Re, the world’s biggest reinsurer, and consists of some of country’s biggest engineering and power companies [The Guardian].

The $400 billion project calls for building enormous solar power plants in the sun-drenched Sahara, and using new high voltage direct current cables that can efficiently transport electricity over long distances to bring the power to Europe. The power stations would use concentrated solar power, in which mirrors concentrate the sun’s rays on a fluid container. The super-heated liquid then drives turbines to generate electricity. The advantage over solar photovoltaic panels, which convert sunlight directly to electricity, is that if sufficient hot fluid is stored in containers, the generators can run all night [The Guardian].

The countries of the northern Sahara–Morocco, Egypt, Algeria, and Tunisia–are said to be interested in the project, although their governments are expected to insist that a portion of the clean energy remains in Africa and is allotted to their own countries. Meanwhile, the project’s backers say they’ll need evidence that the project won’t suffer due to local political instability or terrorism threats. But if all the players can agree on a way forward, the first solar thermal power station could be built in the desert by 2015.