To prevent GMOs from harming the environment, researchers have reprogrammed E. coli so it can't exist without a synthetic amino acid. 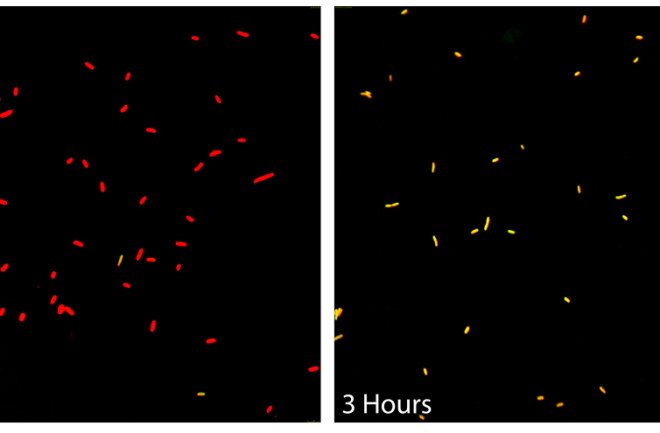 In the lab, these E. coli bacteria (left), engineered to rely on a synthetic amino acid, began dying (right) when deprived of it. | Jaymin Patel/Systems Biology Institute/Yale University

Genetically modified organisms show promise for everything from making vaccines to cleaning up oil spills. But that promise has been clouded by concerns over their potential to escape into the wild and harm ecosystems. Now, scientists have found a way to keep GMOs from going rogue.

In January, researchers at Harvard and Yale reported they had reprogrammed the genome of E. coli bacteria so the cells are dependent upon an amino acid that doesn’t exist in nature. After growing 1 trillion bacterial cells and then depriving them of the synthetic amino acid, not a single one survived, suggesting they’d quickly perish in the wild.

In previous efforts to contain GMOs, organisms found a backdoor escape route by evolving out of their engineered weakness or scavenging nutrients from their environment. This new technique greatly reduces those risks.

“Biotechnology is going to play an important role in society, economy, medicine and health,” says Farren Isaacs, lead researcher of the Yale study. “It’s really important to introduce these safeguards from the onset.”