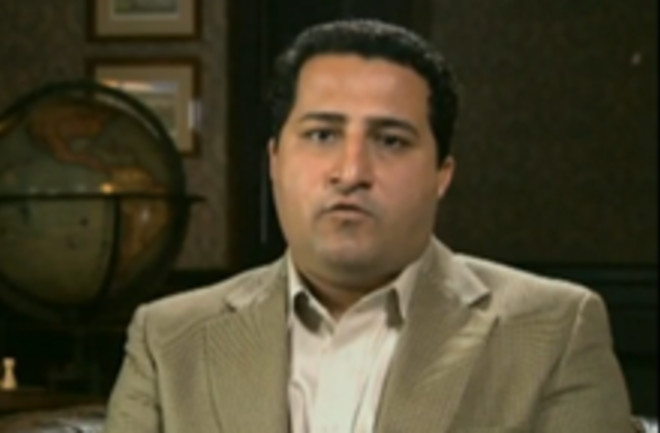 Have you seen this man? If so, please ask him to make up his mind. Shahram Amiri, a 32-year-old Iranian nuclear scientist, is at the center of an episode of United States-Iran intrigue that just got weirder, thanks to YouTube. Amiri disappeared during his pilgrimage to Saudi Arabia last year, and anonymous U.S. officials confirmed that he defected, presumably bringing information about Iran's nuclear program. Now he—or someone purporting to be him—appears in two contradictory videos that claim he was either abducted and tortured by the United States or is living happily here and going about his studies. The first video:

The dark-haired man, appearing unshaven and disheveled, said he was being held against his will in Tucson. "I was kidnapped in a joint operation by the American intelligence, CIA terror and kidnap teams, and Saudi Arabia's Istikhbarat" spy service, the man said in a grainy video aired in Iran on Monday night. He said he had been drugged before being smuggled out of Saudi Arabia, adding that he had been subjected to "severe torture" and "psychological pressures" [Washington Post].

A very different Amiri showed up in a second video today. He, or someone like him, appears in a professionally shot video sitting in front of some parlor with a globe and a chess board, as if he wants to have a few minutes of our time to talk about life insurance.

In it, the man claiming to be Amiri contradicts many of the claims made in the earlier video, noting he is safely and happily residing in the U.S., though experts say it appears he is reading from a script. "I am free here, and I assure everyone I am safe," he says in Farsi [Huffington Post].

So is it really him? Iran, of course, has the political motive to make it look like Amiri was a kidnapping victim and not a defector. And it makes no sense at all to think someone held against his will would be handed a Webcam and Internet access to beam his plight back to Iran. So maybe it's an Iranian fake. But there are more intriguing possibilities:

"Assuming there is some truth to the fact that he cooperated with CIA, he is either having mental issues or he is just trying to make the Iranians go easier on friends and family of his still inside by pushing the story he left against his will," said Charles "Sam" Faddis, a retired CIA officer and author of several books on intelligence. He added: "Nobody kidnaps Iranian scientists and drags them against their will to the United States" [Washington Post].

Frankly, the bent and diction of both talks sound like they were written by government propagandists from one side or the other. The weird jockeying and doubletalk will probably continue because political tensions between Iran and the U.S. seem to be escalating: The U.S. just pushed through

more diplomatic sanctions against Iran for its nuclear activities, and Iran quashed rumors that it would trade the three American hikers still held there for Amiri. Pressing the case that Amiri was kidnapped, Iran filed a formal complaint with the Swiss. (Switzerland's envoys handle our business there since official relations with Iran were cut off long ago.) Related Content: 80beats: Iran Blocks Gmail; Will Offer Surveillance-Friendly National Email Instead