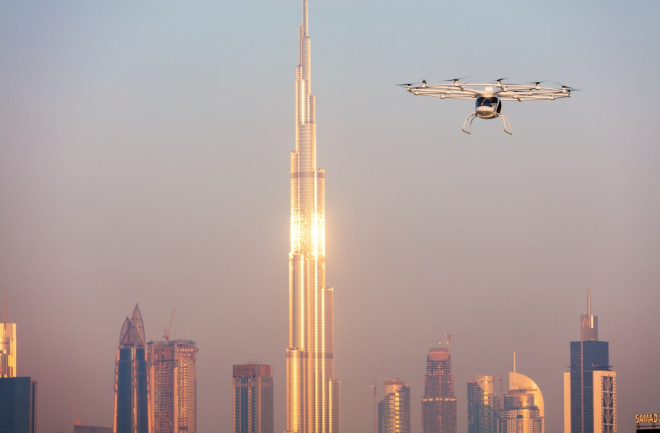 Duabi's flying taxi drone, the Volocopter made by Volocopter GmbH, took its first public flight on Monday. Who's ready to jump in? (Credit: Nikolay Kazakov, Karlsruhe, Volocopter) Dubai’s flying taxi drone took its first public flight on Monday. The autonomous Volocopter, an 18-rotor electrically powered drone made in Germany, can fit up to two people and includes safety parachutes — just in case. From testing drones for a taxi service to deploying robocops, Dubai is constantly positioning itself as forward-thinking. Originally the city was testing the Ehang-184 passenger drone for its air-taxi service, but later switched to Volocopter for undisclosed reasons. Other companies working to ferry people around in flying cars include Uber and Airbus. OK, video or it didn’t happen, right? Watch below to see the passenger drone fly, and prepare to feel like you can take on the world. https://www.youtube.com/watch?v=BZiJcQN5NRM According to Reuters, the drone was aloft for about 5 minutes and flew up to an altitude of almost 700 feet. The Volocopter flew autonomously and without a passenger — hey, it's still in testing stages. When it comes to self-driving cars, a recent study shows people fear those vehicles will be hacked and even fear a robot apocalypse. But what about flying taxis? Well, people may have those fears along with the fear of falling. One thing’s for sure: Dubai continues to build on its futuristic reputation. Now, who’s ready to take a spin in the Volocopter?