: When vampire bats bite their victims, their saliva releases an enzyme called desmoteplase, or DSPA, into the bloodstream, which causes blood to flow more readily. Several years ago, scientists realized that the same enzyme that gives bats more blood for their bite may also help stroke victims by breaking down blood clots. Dubbed Draculin, this blood-clot-bashing drug has now entered a phase 2 study: In hospitals across the country, scientists are currently comparing Draculin with traditional anticoagulants to see if it increases the three-hour window doctors have to treat post-stroke blood clots. “This is one of the studies that actually extends that window up to 9 hours,” says lead researcher Michel Torbey. “We’re hoping the bat saliva, in itself, dissolves the clot with lower risk of bleeding in the brain afterwards.”What's the Context: 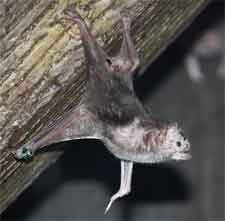 Not So Fast: Just because Draculin made it past the Phase I tests doesn't mean it's in the clear: Most failed drugs bow out during the Phase II trials, when researchers discover drugs don't work as planned.