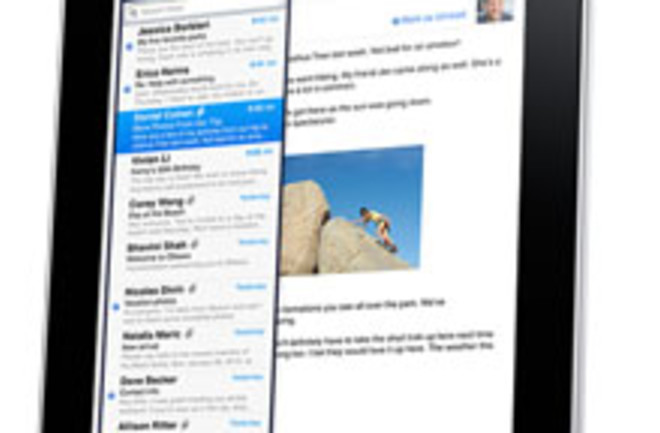 Well, I shouldn't say "arrived"—I went and got it. There are a ton of them at the UPS depot on Washington Street ("MSONY," in UPS lingo), just waiting to be distributed to panting fanboys and -girls on the official unveiling day, this Saturday, April 3. It took some fast talking, energetic digging, and skillful use of bribes, but I finally managed to escape the UPS facility with Discover's very own iPad. (Note that many legal theorists would probably not consider this "theft," as we did actually pre-order an iPad. We just borrowed it for a few days before it would eventually go on to becoming ours on Saturday anyway.) Back to the device itself. We at the Discover office have been playing with the thing non-stop since we "acquired" it last night—even while it charges—and we can say that everything people have said about the iPad is true (well, all the good things): It's the best way to browse the Web, it feels like you are touching the future, and it has very few buttons. But the actual shipped version of the iPad turns out to be far superior to those crude, clunky things that testers used fleetingly and even the ones Apple showed in its own videos. Out of the many improvements, these have so far proven to be the most impressive: ▪ BabelPad: Simply activate this app and the iPad will instantly translate any of over 4,000 spoken languages (some spoken by only a few living people) into any other. It can display the translated text on the screen or flawlessly speak content aloud in one of its pre-installed voices, including those of Morgan Freeman, FDR (voice based on archival recordings of fireside chats), or Steve Jobs himself. ▪ Being James Cameron: Contrary to the pre-release rumors, the iPad does indeed have a webcam—but it's also so much more. To create the amazing spectacle of Avatar, James Cameron worked for years to create the Fusion 3-D virtual camera system. In a few months, Apple has managed to pack comparable technology into its relatively tiny iPad. Just point its camera at your friends and you can turn them, in real time, into Na'vi, the lithe blue aliens of Avatar. Discover staff actually used the iPad to made a short fan-fic sequel to Avatar last night, but in truth, it could use a little more time in the editing room. ▪ Jetpack: We've been hesitant to really go wild with this one inside the office. Suffice to say it seems like it works. So there you have it. The agony of people who must wait two more days—or longer!—to have the device must be excruciating, and we sympathize. But your meaningless pre-iPad life will soon, mercifully, be at an end. PS: If you're one of those oh-so-clever, skeptical-by-nature people, you might be wondering why, if we've been so madly, joyously playing with our iPad, we didn't take a bunch of pictures and throw them all over the Web. Anyone who asks this has obviously never sauntered up to a highly fortified UPS depot and emerged with one of the hottest new tech gadgets before anyone else. We're not posting any pictures because that's admissible evidence in a court of law. By merely publishing this post, we have plausible deniability: This could just be some kind of lark, a big joke. Which it isn't.