For decades, fusion energy has been a dream. This year, it came closer to reality than ever. 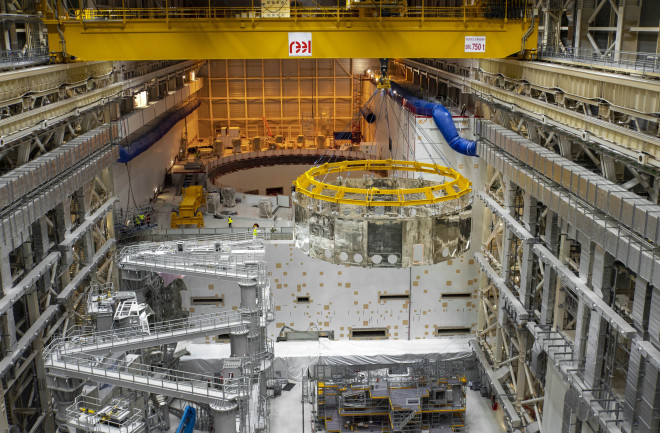 In 2021, ITER’s thermal shield was installed around the tokamak reactor, which harnesses the energy produced by fusion. (Credit: © ITER Organization, http://www.ITER.org)

The world’s largest nuclear fusion device, which is currently being built in France by a collaboration of 35 nations including the U.S., is expected to be completed by 2025. Known as ITER (International Thermonuclear Experimental Reactor), the experimental device is poised to demonstrate that fusion energy can be a viable energy source. New advances in fusion technology have dramatically increased its chances of success.

With nuclear fission, an atom is split in two, creating enormous energy. Fission powers today’s nuclear power plants (as well as atomic weapons). Fusion takes the opposite approach, fusing two atoms together, rather than ripping them apart.

Fusion is different from fission in other ways, as well. Fusion is relatively safe: It produces far less radioactivity and hazardous waste than fission. It doesn’t risk out-of-control chain reactions and meltdowns. And it creates more energy than fission, without producing greenhouse gases. In short, fusion sounds like the perfect replacement for fossil fuels, and it would be — if it could be made to work.

The problem is not the science. “We understand the physics pretty well; we can make fusion,” says Livia Casali, a nuclear physicist at the University of Tennessee, Knoxville, and an ITER Fellow. The obstacles that remain are engineering challenges.

Creating fusion energy means making— and controlling and containing — something very like a small star. (After all, our sun is essentially a giant fusion reactor.) To achieve this, ITER is the most complex engineering project ever built, Casali says. And results from labs around the world are beginning to confirm this audacious pursuit might actually be possible.

A team at the National Ignition Facility in Livermore, California, reported in January 2022 that, for the first time, they achieved a burning plasma condition — the state when the fusion reaction gets most of its energy from the nuclear reaction itself rather than from outside energy sources. Meanwhile, in the U.K., scientists at the Joint European Torus (JET) laboratory created 59 megajoules of sustained fusion energy, setting a new world record. In a press release announcing the achievement, project leaders of ITER described the JET results as a strong indication that they were on the right track to demonstrating full fusion power.

In April, the White House announced a set of initiatives intended to accelerate the development of fusion energy. “The goal has changed,” says Steven Cowley, director of the Princeton Plasma Physics Laboratory. The U.S. government has gone from “Let’s look at the science of this” to “Let’s make some electricity,” Cowley says.

Making fusion a practical and cost-effective source of energy will require continued improvements and innovation. But these recent advances suggest that, far from being a quixotic project, a world powered by fusion energy is a realistic goal. And it is an urgent one, says Casali. “If we want to act on climate change, we don’t have much time to wait. Fusion is the winning card that we must play.”