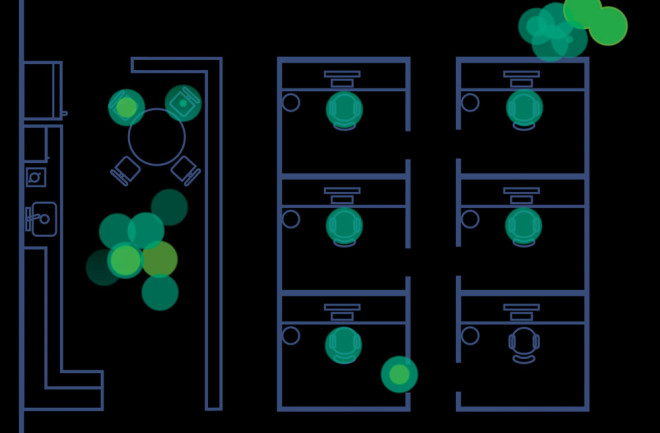 Sensors revealed that people in tight-knit groups who spoke frequently with one another were happier and more productive. | Jay Smith/Discover

Desk-bound comic character Dilbert would probably relate to the legions of headset-wearing operators who worked in the typical Bank of America call center back in 2009. They labored in row upon row of low-walled cubes, fielding calls from customers who were often demanding, sometimes angry, occasionally rude. Burnout and turnover were high and productivity often lagged — and company executives couldn’t figure out what was wrong.

As intractable as these problems seemed, the company found an easy way to turn things around — just by allowing co-workers to take breaks with others on their “teams.” Today, if you enter a Bank of America call center where this simple change has been made, you’d likely see teams of operators huddled together swapping stories or heading off to lunch, cracking jokes like old friends. The result: a 15 to 20 percent rise in productivity and substantial increases in customer satisfaction. Employee turnover has dropped from about 40 percent to 12 percent.

Bank of America’s reversal emerged from an experiment led by Ben Waber, then a doctoral candidate at the Massachusetts Institute of Technology’s (MIT) Media Lab. To learn how workers’ social patterns influence their satisfaction and productivity, Waber outfitted 80 bank operators with palm-size sensors to wear around their necks as they worked. The sensors tracked who talked to whom and for how long, giving Waber, and ultimately company executives, hard numbers that captured how important social interaction was to employee happiness and productivity.

The idea of using computerized sensors to track social behavior came from Waber’s mentor, MIT computational scientist Alexander Pentland. Pentland’s wearable devices, which he called “sociometric badges,” could monitor location, tone of voice and other telling nonverbal details of people’s interactions. In one study intended to measure empathy, Pentland invited a group of psychotherapists and their patients to conduct therapy sessions in his lab, equipping them with the sensors. Feeding the data from the badges into pattern recognition software, Pentland uncovered layers of hidden meaning in patients’ nonverbal behavior. Depressed patients, for instance, might tell their therapist they were “fine” as often as happy ones — but they waited longer to answer the question.

When Waber arrived in Pentland’s lab as a graduate student in 2006, he learned to deploy the sensors for a different purpose: tracking face-to-face interactions in workplaces. In early 2007, he visited a German bank along with a group of economists from MIT’s Sloan School of Management. The economists collected email logs from the workers and had them fill out a daily survey about their workplace interactions and activities. Waber outfitted the employees with Pentland’s badges, which registered when two wearers were near each other, when they were conversing and for how long. Together, Waber and the economists aimed to understand how workplace interactions related to job satisfaction, productivity and stress.

The results surprised Waber. Other researchers had argued that interacting with a larger, more diverse network of people is key to workplace productivity, promoting creativity by exposing workers to multiple viewpoints. But comparing the sensor data with the economists’ survey data, Waber found the opposite: Bankers belonging to a small, tight-knit group of co-workers who spoke frequently with one another — an indicator of what social scientists call social cohesion — were not only happier in their jobs, they also got more work done, shared ideas faster and divvied up tasks more efficiently. Just by tracking how face-to-face encounters within a group changed from one week to the next, Waber could predict changes in the bankers’ job satisfaction with up to 60 percent accuracy. The sensors were “orders of magnitude more predictive than anything that management researchers had previously collected,” Waber says. In subsequent studies, he found that the same pattern held in other workplaces.

In 2009, Bank of America enlisted Waber’s help. For some reason, operators at some of the company’s call centers were vastly outperforming others. Company executives hadn’t been able to pin down what was going on.

To try to get to the bottom of why those centers performed so well, Waber had teams of operators at one of the bank’s call centers wear the sensors. Combining sensor data with employee surveys and performance results, he noticed that operators in tight-knit groups were happier and twice as efficient at making their calls than those in less socially cohesive groups. Most of these face-to-face interactions, he discovered, occurred when operators within the same teams happened to have overlapping breaks.

To confirm the link between shared breaks and employee satisfaction and performance, Waber used the badges to study four teams of 20 workers. Two of the teams continued taking staggered breaks — an arrangement that gave them little opportunity to share tips or vent about volatile customers with their teammates. The other two teams had coordinated breaks, allowing co-workers to vent to their hearts’ content. After three months, Waber found, the teams that took breaks together were 15 to 20 percent more productive than those with staggered breaks.

The insights from his early studies provided the basis for Waber’s latest venture: a small start-up analytics firm called Sociometric Solutions, which uses sensing technology to help make people happier and more effective in the workplace.

Since opening their doors in 2011, Waber and his team have helped companies analyze collaboration patterns within their workforces, uncovering small but critical tweaks that employers can make to improve cohesion within work groups or to promote more cross-talk among groups. For example, changing the numbers and locations of communal coffee pots can have unexpectedly profound effects. (To get two groups talking to each other, the ideal location for a coffee pot is between them; putting the java in the middle of a group, on the other hand, can help build internal cohesiveness.) Data from the sensors have also highlighted that even a single flight of stairs is a powerful psychological barrier: People who work on different floors of a building almost never talk to each other, even if doing so would mean a walk of less than a minute.

Recently, the office furniture company Steelcase hired Waber’s team to help design an optimal workspace — one that promoted happiness and productivity — for sales teams in their newly built headquarters. The company considered adopting an open-seating plan, in which people choose desks randomly each day. But Waber’s sensors revealed a flaw in that scheme: A few socially important employees controlled the flow of information, and critical interactions happened mostly at those employees’ desks. An open seating plan, the data suggested, would be crippling to the way information in the company flowed. Without assigned desks, Waber says, “People wouldn’t know where to find these socially important people. They might give up and not look for them.”

Sensing technology confers the ability to recognize such issues early, replacing speculation and conjecture with verifiable information about how people interact at work. “The technology enables experimentation,” Waber says. Yes, some of those experiments will fail, “but when one succeeds, you will quickly know and can roll it out to the entire company. That fundamentally changes the speed at which companies can run.”

[This article originally appeared in print as "Sensing Success."]