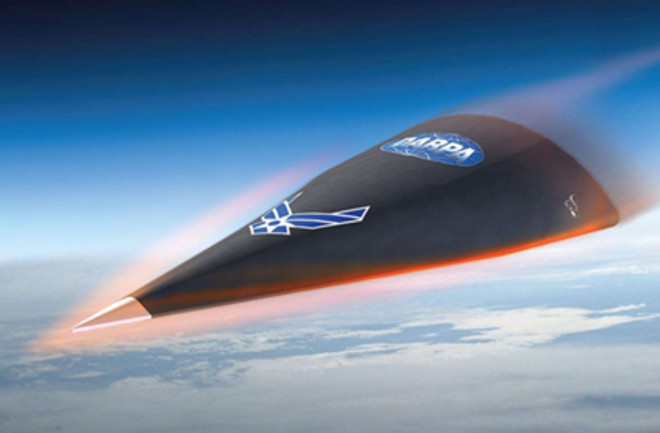 It was a big week for experimental military aircraft, with the Air Force's secretive X-37B space plane and the Navy's biofuel-powered "Green Hornet" both achieving successful test flights. But the most ambitious—the HTV-2 hypersonic glider under development by the Defense Advanced Research Projects Agency (DARPA)—lost contact with its operators during its run.

Launched from Vandenberg AFB, Calif. on April 22, the unmanned HTV-2 was planned to cross the Pacific and impact the ocean north of Kwajalein Atoll in the first of two flights to demonstrate technology for a prompt global strike weapon [Aviation Week]

. It successfully achieved separation from its booster rocket high in the atmosphere; however, nine minutes into the test the glider lost communication. Now the military is studying the test flight telemetry to figure out where the HTV-2 would have crashed down.

Thursday's mission was the first of two planned in the HTV-2 program, which uses Minotaur 4 boosters developed by Orbital Sciences Corp. from decommissioned Peacekeeper intercontinental ballistic missiles. The U.S. military is trying to develop technology to respond to threats around the globe at speeds of Mach 20 or greater, according to DARPA [AP]

. DARPA is being fairly tight-lipped about possible uses for the HTV-2, but it's not hard to see why the military would be excited about an aircraft that travels about 13,000 miles per hour and can strike on the other side of the world with "little or no advanced warning," as the agency says. Program manager Paul Erbland says the key to HTV-2 flying at such speed and height is its carbon shell, which is capable of withstanding extreme heat and pressure. It doesn't burn off material to get rid of heat.

The vehicle is designed to fly at a low angle of attack relative to other hypersonic vehicles. “Shuttle and similar vehicles fly at roughly 40°; HTV-2 is substantially below that,” he said [Aviation Week]

. As for the communications failure, DARPA has some time to address the problem before the craft's second planned test flight next March. Related Content: 80beats: Will the Pentagon Build the Jetsons' Flying Car? 80beats: Highway to the Green Zone? Navy To Test a Supersonic Biofuel Jet 80beats: DARPA Wants a Biofuel Jet, While Germany Works on a Hydrogen Plane 80beats: DARPA's Kooky $40,000 Scavenger HuntImage: DARPA