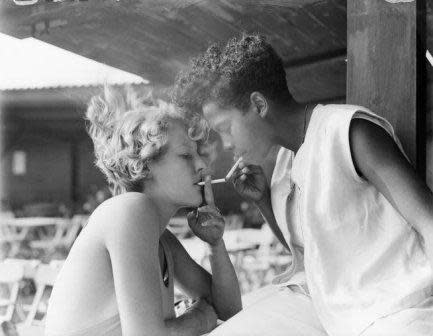 Trails of acrid grey mist hang in the air. I use the front of my shirt as an impromptu gas mask as I cough out my drink order to the bartender. Passing through one of these repulsive clouds is an irritating game of “try not to breathe.” The saturated air inside has made it almost impossible for me to develop any knowledge of my city’s lively hole-in-the-wall bar scene, still skirting statewide smoking bans. For decades Surgeon General reports have communicated the health risks of smoking, and more recently the risks of second-hand smoke. Given the hazard, “why would smokers confine themselves in a space that amplifies their exposure?” I say to myself while heading back to the table and dodging the lowly held embers. Beyond the fleeting buzz, smokers perceive themselves to be at a much lower risk of adverse health effects from lighting up than you or I would. Optimism springs eternal. Near the end of September Gallup released a poll showing that fewer than 30% of US smokers believe that second-hand smoke is “very harmful” as compared with 63% of nonsmokers. The finding is in line with what Gallup has found for the past 11 years, with the percentage of smokers who believe in the “very harmful” nature of second-hand smoke never eclipsing 36%. The Gallup poll highlights a risky disconnect. Smokers significantly downplay the dangers of second-hand smoke in comparison to nonsmokers (74% and 91% think second-hand smoke is at least “somewhat harmful,” respectively). But most Americans agree that smoking itself is harmful (91% of smokers and 97% of nonsmokers). A growing number of studies illuminate the dangers of second-hand smoke, yet this disconnect has remained steady over the past decade. Results like these raise an alarm. The prevalence of US smokers is at an all-time low, but efforts to realize the dangers of smoking (and second-hand smoke) have been ineffective. Even a disturbingly blunt ad campaign launched by the CDC this past March failed to impact attitudes. The divide between how smokers and nonsmokers recognize risk results from more than just impotent communication strategies. For all risky behavior, crystallizing the inherent danger means smashing up against a wall of cognitive bias. Optimism Springs Eternal The optimism bias is a tendency for people to believe that they are less likely to experience a negative event compared to others. For example, we acknowledge the danger of driving a car but believe that others are more likely to get in accidents (“people who get in car accidents are bad drivers, I’m a good driver!”). Similarly, studies consistently find that smokers believe the health risks of smoking are lower for themselves than for other smokers. Compared with nonsmokers, both adolescent and adult smokers significantly demote health risks [1].

Simply put, risk is measured by two factors: severity of risk and likelihood of risk. If you work on an oilrig, for example, the risk would be high: accidents and health effects are severe and likely to happen. Conversely, being a telemarketer poses a low risk: accidents are rare and minor. Psychologists and social scientists discovered the optimism bias by measuring how people compare personal risk to the risk others face [2]. This undue optimism is a concatenation of many other biases and cognitive quirks. We want to believe positive events will happen to us and we want to seem more “well off” than others. The more in-control we feel, the less risk we perceive (e.g., we consider it less risky to drive a car than to ride in one [3]). A “representative heuristic” often prevents us from making accurate comparisons between others and ourselves (e.g., when thinking of a person who is at risk for a car accident we tend to stereotype them as a bad driver, rather than as an average driver). The optimism bias is quite the obstacle for public health officials. Believing that you are always the lucky statistic removes some of the fear inherent to risky behaviors like smoking and makes preventative measures seem unnecessary. The hope in studying the optimism bias is that if information campaigns on the large scale and public health officials on the small scale can reduce bias in the public, it will encourage the adoption of healthy/preventative behaviors. To date, these efforts have been unsuccessful; in some cases even increasing bias [4]. “I can quit whenever I want to…I just don’t want to” A more disturbing finding in the optimism bias research, compounding what Gallup has found, is that adolescents have even more optimism than adults do about the risks of smoking. In one study in the journal Addictive Behaviors [5] adolescent smokers (aged 12-17) displayed some particularly disturbing optimism regarding addiction. The percentage of adolescents who agreed with the statement “I could smoke for a few years and then quit if I wanted to” was 60%, compared to 26% of adolescent nonsmokers—a whole 12% higher than adult smokers agreeing to the same statement. And in nearly every case, adolescent smokers downplayed the risks more than adult smokers (and both downplayed health risks compared to nonsmokers across the board). While still displaying undue optimism, adult smokers acknowledge the risk of addiction and the difficulty of quitting more than adolescent smokers. Perhaps the increased risk perception in adults comes with the personal experience of the addictive and health effects associated with smoking, something that adolescents lack. Undue optimism is coupled to control. Using car accidents again, people are more likely to think they will not be harmed in a car accident if they are driving the car [3]. (The feeling of control surely plays into the misperception that it is more dangerous to fly than drive.) Being able to willfully put down a cigarette may be the feeling of control that generates dangerous adolescent optimism. The adults who have realized how little control they actually have over nicotine addiction are accordingly less optimistic about addiction. Personal experience may trump personal control. But personal experience with smoking is a double-edged sword (aren’t most swords?). In the Addicting Behaviors study, adult smokers were 11% less likely than adolescent smokers to think that most people who smoke all their lives will eventually succumb to a smoking-related illness. I would wager that many smokers know other life-long smokers who haven’t died from smoking. Combine this personal experience with the optimism that they personally are less likely to die from smoking, and a confirmation bias rules the day. When optimistic about the health hazards of smoking, negative outcomes are ignored or discounted and positive outcomes (i.e., not dying) are emphasized. Adolescent smokers have yet to experience this harmful cognitive combination, hence the difference. The danger to this lack of pubescent pessimism is that it can influence the decision to smoke in the first place. The misperception of addiction risk could overpower the consideration of possible health effects 30 or 40 years down the road. If adolescents believe that they can smoke for a few years and quit “if they wanted to,” the decision to start smoking entails less risk. Combine this with optimism that downplays smoking-related health risks more that adult smokers and all nonsmokers, and you have a real public health problem. Back to Reality Unfortunately, most attempts to make people aware of the optimism bias have failed. Researchers have suggested trying to make risks seem “closer” by showing study participants lists of risk factors, encouraging participants to perceive themselves as inferior to others, asking participants to think of high-risk individuals, and giving participants attributes of why they specifically are at risk. All these techniques were crafted to counter some of the biases and cognitive quirks mentioned above. All increased the optimism bias rather than decreased it [4]. But the optimism bias isn’t all bad. While it does create real problems for the perception of negative events (hampering preventative efforts and encouraging risky behaviors), it increases the perceived likelihood that positive events will happen to us. The boost in well-being and self-esteem is real, even though your calculation that you are more likely to get the promotion than Johnson down the hall is flawed. Says Tali Sharot, author of The Optimism Bias:

Even if that better future is often an illusion, optimism has clear benefits in the present. Hope keeps our minds at ease, lowers stress and improves physical health. Researchers studying heart-disease patients found that optimists were more likely than nonoptimistic patients to take vitamins, eat low-fat diets and exercise, thereby reducing their overall coronary risk. A study of cancer patients revealed that pessimistic patients under the age of 60 were more likely to die within eight months than nonpessimistic patients of the same initial health, status and age.

An unwavering optimism may be simply human nature, hardwired by evolution either adaptively or as some curious by-product. Efforts to mitigate the optimism bias have been met with a resilience that certainly suggests as much. Though we haven’t quite figured out how to get smokers on the same page as nonsmokers, realizing bias is the first step towards correcting it. Removing my improvised gas mask, and with drinks in hand, I return to my table of friends. One notices as I struggle to clear my throat of the caustic vapor and asks “Don’t they know how bad that is for them?” “Yes and no,” I answer. References: [1] Weinstein, N.D. (1998). “Accuracy of smokers’ risk perceptions”. Annals of Behavioral Medicine 20: 135-140. [2] Klein, Cynthia T. F.; Marie Helweg-Larsen (2002). "Perceived Control and the Optimistic Bias: A Meta-analytic Review". Psychology and Health 17 (4): 437–446 [3] Harris, Peter (1996). "Sufficient grounds for optimism?: The relationship between perceived controllability and optimistic bias". Journal of Social and Clinical Psychology 15 (1): 9–52. [4] Weinstein, Neil D.; William M. Klein (1995). "Resistance of Personal Risk Perceptions to Debiasing Interventions". Health Psychology 14 (2): 132–140. [5] Arnett, Jeffery J. (2000) “Optimistic bias in adolescent and adult smokers and nonsmokers”. Addictive Behaviors 25 (4): 625-632. Further Reading:The Optimism Bias, by Tali Sharot Images: “Lighting each others cigarettes, 1932” by Nationaal Archief/Willem van de Poll; Table by author