Computerized Smart-Gun Can Shoot Someone Behind a Rock 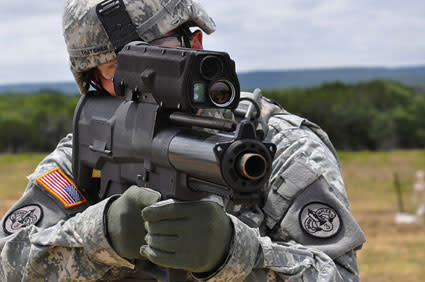 Need to shoot someone hiding behind a rock? The military's got a gun for that. The weapon is called the XM-25, Counter Defilade (a word I had to look up) Target Engagement System--basically, it provides a way to shoot someone who is hiding behind an obstacle. It works by shooting a mini-grenade-like round that is programmed to detonate after passing the barrier. The detonation scatters lethal shrapnel toward the enemy target.

The weapon's computing sight measures the distance to the target precisely using a laser, and corrects automatically for such factors as air pressure, temperature, relative elevation etc. Buttons above the trigger allow the point at which the shells will detonate to be moved nearer or further away. [The Register]

The first set of prototypes arrived in Afghanistan in November and are currently being carried on active patrols. The soldiers are testing them out and suggesting improvements and adaptations to prepare for the weapon's full roll-out. While the world has known about the XM-25 for some time, the U.S. Army just provided an update on plans for the experimental weapon:

Finally, with testing complete and Army approvals in place, 12,500 systems will be produced and issued beginning in early 2014 – enough to support one per infantry squad and Special Forces Team. [PEO Soldier LIVE]

The mini-grenade isn't the only egg in this computerized monster gun's basket. Currently the army is also producing armor-piercing rounds, and future ammunition could include door breaching rounds and non-lethal blunt and airburst rounds.

The airburst non-lethal would be a smaller version of the "flash bang" stun grenades popular with special-ops and police SWAT teams in hostage situations, and the blunt version a more ordinary plastic or rubber bullet. [The Register]

80beats: Police May Soon Use Pain Guns That Heat Skin With Microwaves

Discoblog: Military Blob-bot to Ooze Its Way Past Enemy Lines