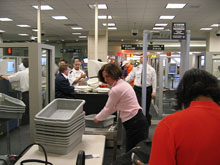 If you’re flying to Australia anytime soon, be prepared to show a lot of skin at the airport.From now until the end of November, Melbourne airport is testing out new X-ray scanners that can see through clothing and leave little to the imagination.The scanners may soon replace pat downs with “virtual strip searches,” which officials say will save time at security check points.For the trial period, only passengers who volunteer will be scanned.

The full-body scanners use low-energy X-rays that reflect off skin to provide chalky images of naked bodies.They will reveal any hidden objects, even nonmetal ones that would be bypassed by traditional metal detectors.

But is it really necessary to see everything?Apparently, yes.Cheryl Johnson, general manager of the Office of Transport Security, says they decided not to blur out genitals or breasts because it would “severely limit the detection capabilities.”They will, however, blur out people’s faces.Johnson also assures passengers that the images will not be saved and that the security officer examining the images will be located in a private area (supposedly so they won’t be able to compare X-ray images with the real thing).

Not surprisingly, many are not happy with the idea of a peep show at check-in.The European Commission has been pushing to add these scanners to its airports but the European Parliament (the legislative body of the EU) voted today to put the measure on hold for further study.