China's "Heavenly Palace" Space Station Module Due to Launch in 2011 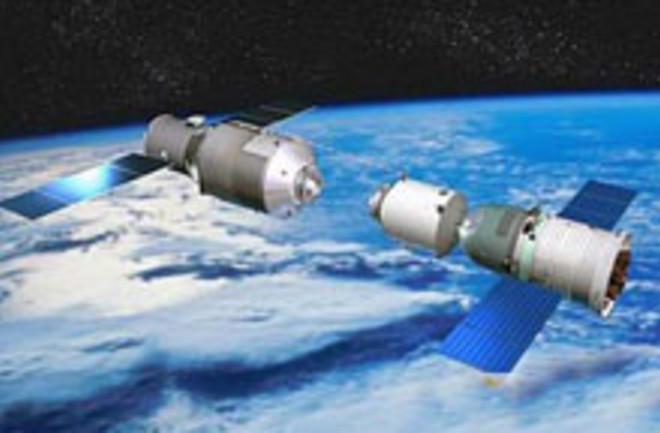 China will soon have an outpost in space. The government has announced that its first unmanned space module, the Tiangong-1 (or "The Heavenly Palace"), will be launched next year. The module will serve as a docking station for other spacecraft before being transformed into a permanent taikonaut residence and space lab within two years of the launch

. It was originally due to launch this year, but now will see flight only late in 2011, due to technical reasons, Chinese officials said. The Tiangong-1 is expected to be 30 feet long and capable of housing three taikonauts; future missions will add other modules to construct a larger Chinese space station. The Tiangong-1 design, unveiled in a nationally televised broadcast on last year's Chinese New Year,

includes a large module with docking system making up the forward half of the vehicle and a service module section with solar arrays and propellant tanks making up the aft [SPACE.com].

The Tiangong-1 is expected to dock the unmanned Shenzhou 8 spacecraft first to test the robotic docking systems before hosting the manned Shenzhou 9 and 10 spacecraft, which are both expected to carry two or three taikonauts into space. China's other space plans include

launching a second lunar probe in October in preparation for an unmanned moon landing by the end of 2012. A possible manned lunar mission has also been proposed — with a target date of 2017 — putting China in the forefront of a tightening Asian space race involving India, Japan and South Korea [Associated Press].

China has insisted that its space programs are for peaceful purposes only. However,

the head of the Chinese Air Force, Gen. Xu Qiliang, appeared to have gone off-message when he said in November that international “military competition has shifted towards space” [The New York Times]