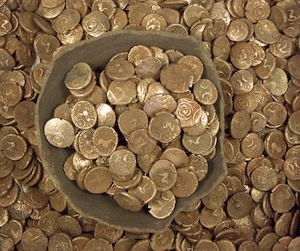 This might look like a lot of old coins, but they come from a trove 35 times smaller than the most recent find.

Uncovering ancient buried treasure doesn’t require the skills to interpret a secret map or navigate a booby-trapped cave. All it took to turn up the largest hoard of Iron Age coins ever found in Europe were two metal detectors…and a lot of patience. After 30 years of searching, Reg Mead and Richard Miles discovered a cache of 30,000 to 50,000 gold and silver Celtic coins worth up to $15 million. About three decades ago, Mead and Miles heard that a farmer had discovered some silver coins in a field on Jersey, a self-governing island in the English Channel. Although most people would dismiss the rumor, the two men were so intrigued that they started investigating with their metal detectors, a practice they continued through February of this year, when their long quest turned up

60 silver coins and one gold one. Still not satisfied, the men kept looking. And their determination paid off when they unearthed a four-foot-long block of clay filled with silver and gold coins from about 50 BCE. Experts suggest the coins came from Armorica in today’s Brittany and Normandy, and may have been buried to preserve the wealth from Roman invaders. And that wealth is significant: the clay contains tens of thousands of coins worth $156 to $312 apiece. The treasure is currently hidden away while specialists from the Jersey Heritage Museum, who helped excavate the hoard, evaluate the find and the government of Jersey decides who is the coins’ rightful owner. [via Gizmodo