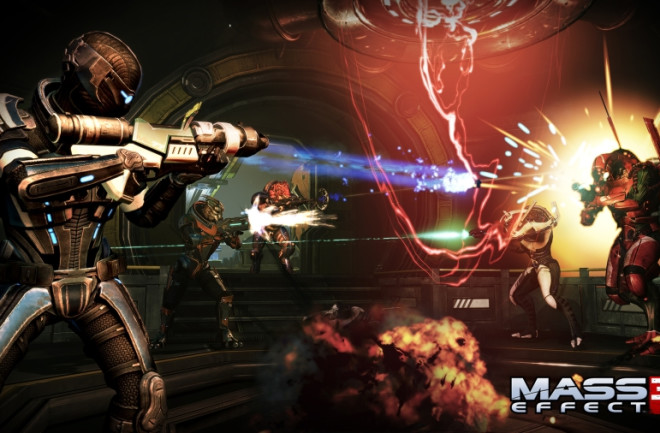 Video games with cooperative gameplay such as "Mass Effect 3" could have pro-social benefits. Credit: Bioware / Electronic Arts Many Americans love to celebrate bone-crunching athletic games such as football that encourage strong social bonds among teammates of all skin colors. The idea of team games helping to cross racial barriers may also apply to violent video games that require gamers of different ethnicities to team up in order to successfully take down virtual aliens, robots or enemy soldiers. Most studies of violent video games have focused on how the virtual violence of shooting enemies in the head or performing knife kills up close may affect the real-life behavior of gamers in the short term. But some researchers suspect that the violent content of games may affect real-life behavior less than the social context of player cooperation or competition. For instance, a recent slew of multiplayer games such as the popular game "Destiny" or the "Borderlands" series allow players to team up as they fight enemy aliens and monsters in science fiction settings. Early research has suggested that games requiring player cooperation may encourage pro-social behavior regardless of how many virtual acts of violence are committed in the course of such teamwork. And if gamers have a good time playing cooperatively with other people of different ethnicities, the pro-social benefits could also include reductions in racism. A new project at The Ohio State University aims to see whether violent video games can encourage positive social experiences and connections between gamers of different ethnicities — specifically white and black players. The study looks to raise $4,104 on the science crowd-funding platform Experiment.com by Oct. 29. Part of the funding would go toward providing a small participation fee to volunteers who don't mind contributing a few hours of their time to playing video games in the name of science. Another part of the funding would help pay for independent researchers to identify the behaviors observed during the study, so that the views of the main research team don't skew the results. "We decided to see what happens when you’re playing with someone of a different race from you," says Katherine Dale, a Ph.D. student at Ohio State University. "How will the gameplay affect your attitude toward that person?" https://www.youtube.com/watch?v=DNDLeH9lvHM Dale hopes to recruit a few hundred volunteers willing to take time off from school or work to visit her research group's lab and play a cooperative video game such as "Mass Effect 3" — a game that includes a multiplayer mode pitting a team of players against waves of virtual aliens, robots and human enemies. Study participants would be put in a situation where they played cooperatively with either a white or black player hired by the research team to play a certain role in the experiment. (The virtual avatars of players in "Mass Effect 3" multiplayer are usually either aliens or humans wearing futuristic armor and helmets that hide their faces.)

The Ohio State University team is betting that a fun gaming experience with a person of a different ethnicity might go a long way toward improving people's opinions of that different ethnicity. That hunch builds upon a 2014 study published in the journal Communication Research by a team that included Dale's colleague, David Ewoldsen, a professor in psychology and communications at The Ohio State University, which looked at the effect of playing violent video games cooperatively with a student from a rival university. The results showed that playing violent games cooperatively with the "rival student" still encouraged "helping" behaviors and actually reduced aggression, despite the violent content in the shooting game "Unreal Tournament III." Ewoldsen also coauthored a 2012 study in the journal Cyberpsychology, Behavior, and Social Networking showing that the social context of playing a video game — cooperating with other players versus competing with other players — influenced real-life behavior more than the violent content of the video games. In other words, violent video games described as so-called "murder simulators" could still have positive, pro-social effects overall if played cooperatively. The upcoming study focused on how cooperative gameplay affects attitudes toward people of different ethnic backgrounds is just a first step. The Ohio State team could also eventually look at whether the cooperative spirit of some violent video games can also benefit relations between people of different religious backgrounds or sexual orientations. "We’re interested in the underlying mechanisms for attitude change in general," Dale explains. "We're looking at a specific group [of different ethnicities] in this upcoming study, but we're hoping through future studies to see how the medium of video games functions in attitude change more generally." https://www.youtube.com/watch?v=Fzo_kF4mlWY Video games don't have to be violent in order to provide the pro-social benefits of playing cooperatively. But it's just a fact that many popular video games — often violent games focused on shooting enemies with guns — increasingly feature this type of cooperative gameplay. "Destiny" and the latest in the "Borderlands" series represent just the most recent examples from this year, with "Destiny" alone averaging about 3.2 million players online each day.

Still, researchers have only just begun to understand how the social context of gaming affects real-life behavior. For instance, what happens in the case of violent games where players must cooperate as a team against teams of other players? Or what about games that include individual competitive goals along with requiring cooperative teamwork? Some cooperative multiplayer games, including the series "Call of Duty," are infamous for their online gaming sessions filled with players who would just as soon trash-talk their teammates as praise them for their cooperation. Another question is how applicable the upcoming study would be in real-life gaming situations — especially when many gamers playing over their Internet connections rarely get a glimpse of the real player faces behind the virtual game avatars. If Dale and Ewoldsen can establish a link between cooperative gameplay in violent video games and improved impressions of gamers belonging to different ethnicities, the next step might be to understand how this could realistically play out in a real-world scenario where gamers usually only glean clues about other gamers' ethnic identities through their accents or online names. "There are a lot of variables that go into video games and video game design that parents worry about," Dale says. "I think that this could possibly show that in the case of violent video games, positive effects can happen." To help fund this video game study, see the project on Experiment.com.