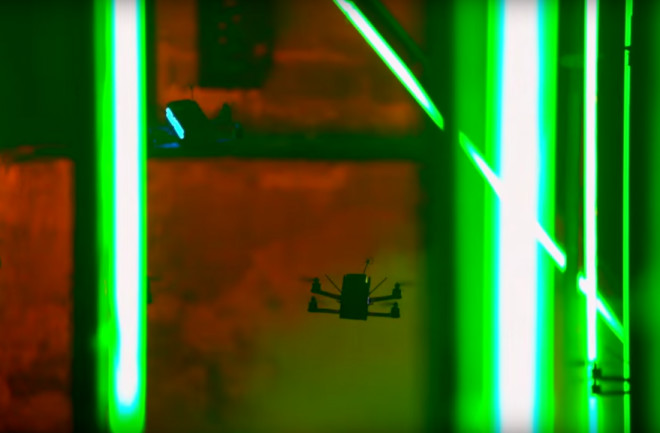 Quadcopter drones race through an indoor obstacle course. Credit: Drone Racing League Not much on live TV compares with the tension of watching human race car drivers risk possible injury or death at speeds of hundreds of miles per hour. A split second of bad timing can quickly transform a tight, controlled race into chaos as machines spin out of control, careen off walls or smash directly into one another. By comparison, the rise of robot racing with flying drones or self-driving cars aims to attract both old and new racing fans without putting human lives at risk. The big question is whether human fans will tune in to watch speedy robots race without the added adrenaline rush of danger. Drone racing has already existed for some time as an underground sport that pits nimble quadcopters against one another as they fly through aerial racetracks made of brightly-lit rings, illuminated barriers and pipe tunnels. The effect of watching flying robots racing among colorful obstacle courses is similar to watching a real-life video game in many ways. Such spectacle has inspired several companies that want to transform drone racing from a hobby into an official televised sport event. On Jan. 26, a new company called the Drone Racing League announced its inaugural racing season with a focus on giving spectators a thrilling, high-definition (HD) view of the race from the drones' point of view, according to Quartz. It's a unique viewing experience that may be just enough to win over racing fans even without human life and limb on the line. https://www.youtube.com/watch?v=0kEED9wN76w

Getting Drone Racing Ready for Primetime

The Drone Racing League isn't alone in trying to elevate drone racing beyond a hobby. In 2015, the first U.S. national drone racing championship took place in California with about 120 racers operating drones capable of reaching speeds of almost 70 miles per hour. Organizers plan a follow-up national race for October 2016. Drone racing faces several challenges before it's ready for the big time, Quartz points out. For example, the human operators pilot their speedy drones by wearing special goggles that give them a forward camera view from the drone's perspective. The video feed from the drone camera relies upon reliable radio communication between the goggles and drone. Otherwise, drones can easily crash mid-flight if their pilots lose the video feed signal. (Of course, such spectacular crashes may satisfy some fans in a different way.) Standard-definition video provides the best solution for providing reliable video feeds to pilots, because it won't cause any lag in the streaming video. But spectators want to revel in high-definition (HD) views from the drone's perspective. The Drone Racing League's solution: give the drone pilots standard-definition video and don't televise the races live. Instead, the league plans to collect and edit footage from HD cameras on each drone to provide a higher-quality TV viewing experience that won't stream live. It also plans to conduct its flying robot racing in relatively confined areas such as stadiums and abandoned buildings. https://www.youtube.com/watch?v=AjKIve9Q3f0

Robot car racing could also become a thing as self-driving car technologies move ahead. In Nov. 2015, the Fédération Internationale de l'Automobile (FIA) Formula E racing series for electric racing cars announced a spinoff series for driverless electric cars. Instead of human drivers, such robot racing cars will rely on real-time computing algorithms and AI technologies to make decisions on the racetrack. (As IEEE Spectrum points out, Formula E engineers and mechanics already rely heavily on computing algorithms to figure out the best power management solutions for cars driven by humans.) The novelty of watching driverless vehicles pull off robot racing without humans behind the controls may prove enough to get human spectators interested. Such robot racing goes beyond even drone racing that still requires human operators to pilot them remotely from the ground. In addition, Formula E plans to start off by having the robot racing take place just before the main events featuring human drivers. Still, the question remains as to whether robot car racing will appeal to the broader racing car audiences for NASCAR and Formula One. In 2015, a global survey of 35,000 Formula One fans asked what was the main reason they watched the races. One of the top answers included "technical innovations." On the other hand, the most popular answer for watching Formula One was "the speed and risks involved."