California Greenhouses Will Use Sun's Heat to Extract Sticky Oil 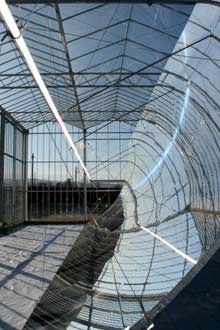 Perhaps you've heard the saying, "We're not running out of oil. We're running out of easy oil." One place where oil is hard (and heavy) is below the Californian ground, where extractors must blast the sludgy petroleum with steam to get it flowing. Most such operations use natural gas to make the steam, but one startup has turned to an unusual partner for oil mining—solar energy—to try to make the business more efficient. How? Greenhouses full of mirrors. GlassPoint, a company based in Fremont, California, wants to use solar thermal energy to cook up some steam. Unlike photovoltaic solar, which converts the sun's radiation directly into electricity, solar thermal projects trap and focus the sun's heat. Those projects typically involve using the heat to turn turbines and create electricity, but this design is simpler.

GlassPoint's system is cheaper because it doesn't need the turbines, and because it has redesigned its mirrors and pipes to pump out steam that's 250 °C to 300 °C (whereas the steam required to drive turbines must be 350 °C to 400 °C). [Technology Review]

With greenhouses that don't require the expensive steel support beams of power plants—and by employing relatively inexpensive mirrors to focus sunlight—the company hopes to be able to drive down the cost of steam to $3 to $3.50 per million BTUs. That's opposed to $4 for the natural gas that's commonly used, and $11 to $12 for solar thermal plants that produce electricity. In addition, that $4 price for natural gas could be on the rise if the market bounces back, or when California's cap-and-trade

"Steam is the largest cost associated with producing oil in these thermal projects," says GlassPoint vice president John O'Donnell. "Now you can run them longer because the steam is cheaper. You can get 10 to 20 percent more oil production out of the same well." [Scientific American]

, which took less than two months to build and occupies less than an acre of land. The greenhouse sits at a mining site run by Berry Petroleum in Kern County, California, where GlassPoint will test out its technology. The test project will generate about 1 million BTUs per hour. Though Technology Review points out

that this is just 1 percent of the Berry site's total needs, O'Donnell remains sunny about scaling up the technology once the test run is complete.

Roughly 40% of the oil drawn out in the state relies on the natural gas method. The company claims that it could eventually take over 80% of that burden -- and at cheaper rates, even though natural gas prices are currently low. [Los Angeles Times]

Solar power veterans, though, have learned the difficulty of reaching such gaudy numbers. And GlassPoint is taking its first steps.

Whether GlassPoint can get that far remains unclear. The company has no track record in the oil industry and has had three different business strategies in less than two years. Formerly known as CleanBoard, GlassPoint changed its name in October 2009 when it abandoned plans to use a solar-powered factory to make gypsum-based wallboard and said it would work with other wallboard manufacturers. Last year, it refocused its business yet again on using solar power to extract oil. [The New York Times]

Nevertheless, using solar energy to extract heavy oil is a way to use one ample California resource to tap another. And greenhouses themselves have a lot to offer solar energy producers:

The greenhouse also offers another key advantage: keeping the mirrors clean of the dust, dirt, sand and humidity that plague oil fields (and deserts generally) around the world. And automated washing equipment borrowed from the agricultural greenhouse industry—essentially automated water sprayers with brushes like those in a car wash—scan clean the glass house that shields the solar thermal equipment from the wind and dust. [Scientific American]

DISCOVER: Introducing the Most Efficient Solar Power in the World

DISCOVER: The Age of Extreme Offshore Oil Is Just Beginning