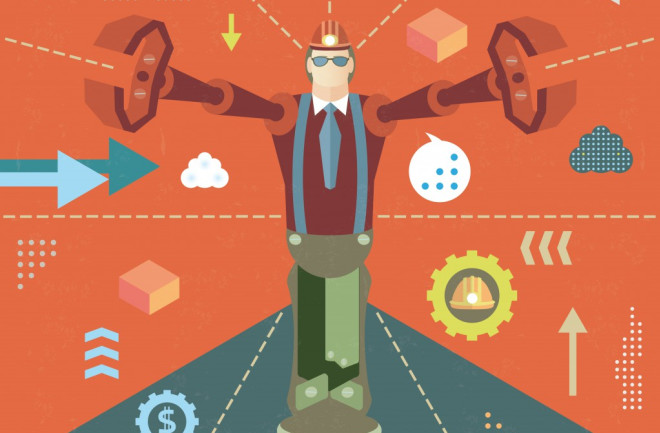 Credit: F. A. Alba | Shutterstock Many of the world's business leaders seem fairly dazzled by the latest advances in artificial intelligence and robotics that promise to help reshape the world. A majority of CEOs surveyed in a global study said that technology would be their company's greatest competitive advantage in the future and would create greater value than people will. But their confidence in technology may blind them to the fact that their human workers remain the likeliest source of innovation and value in the future. The global study by Korn Ferry, a management consultant firm based in Los Angeles, included interviews with 800 business leaders at the head of multi-million and multi-billion dollar global organizations. About 44 percent of those CEOs went so far as to agree that robotics, automation and artificial intelligence would make people "largely irrelevant" in the future of work. That is a terrifying prospect for the vast majority of humans living on this Earth, even if such dire predictions for the human workforce are highly debatable. But a significant majority of CEOs also tended to value technology over human workers as their company's greatest asset going forward into the future. “Leaders may be facing what experts call a tangibility bias,” said Jean-Marc Laouchez, global managing director of solutions at Korn Ferry, in a press release. “Facing uncertainty, they are putting priority in their thinking, planning and execution on the tangible—what they can see, touch and measure, such as technology investments." This obsession with technology seems to occupy anywhere between 40 and 60 percent of these CEOs' priorities in terms of strategic focus, financial investment and their own time, according to the Korn Ferry study. By comparison, human employees and the workforce did not even make the top five assets listed by the 800 CEOs: Technology; R&D/Innovation; Product / Service; Brand; and Real Estate (offices, factories, land). But such confidence in technology may actually be leading many of these CEOs astray in their leadership and planning for the future of their companies. An annual study on innovation has shown no significant relationship between a company's financial success and innovation spending, according to a 2013 report by the professional service firm KPMG. Technology also does not play the most important role. The most successful corporate innovation strategies are those that cultivate human workforce talent; the resource that a majority of CEOs seem to ignore in the latest Korn Ferry study. "Putting an exact value on people is much more difficult, even though people directly influence the value of technology, innovation and products,” Laouchez said. Korn Ferry describes itself as a "people and organizational advisory firm" that specializes in finding candidates for executive-level jobs and cultivating leadership and talent among workforces. Alongside its survey of CEOs, it also released a new study commissioned from the Centre for Economics and Business Research in the UK that tries to put a dollar value on the human workforce versus technology and other more tangible assets such as real estate and inventory. The economic modeling suggests that human capital worldwide can be valued at approximately $1,215 trillion. That value is more than double the value of the world's physical capital such as technology, real estate and inventory. Such huge value on human capital will likely hold up for at least the next five years, according to the economic analysis. In terms of individual countries, the United States has the most human capital with a value of $244 trillion. That is almost four times greater value than the total U.S. physical capital valued at $62 trillion. If the human workforce seems so crucial to a company's wellbeing, why the huge blind spot among many of the world's CEOs? Some of the influence may come from company shareholders: 40 percent of CEO respondents in the Korn Ferry survey said they had felt shareholder pressure to invest in more physical capital such as technology. About 62 percent of CEOs also said they did not believe they could materially influence their human employees' performance, which may lead them to see more transformative value in technology. The lesser value of people in CEOs' eyes compared with technology will obviously not help many human workers. But it also likely hurts the competitiveness of many of the huge global companies that the CEOs lead. There seems to be a potentially huge lost opportunity when these CEOs do not prioritize the human talent and leadership that could truly drive innovation within these companies. Instead, business leaders recruiting new executives prioritized understanding transformation through technology, tech knowledge and tech capability (ranked as priorities one, two and four, respectively). By comparison, understanding culture and how to manage people were among the CEOs' lowest priorities in hiring the executives providing leadership to their firms. There is no doubt that the rise of artificial intelligence and robotics will mean huge, transformative changes for both the human workforce and companies. But the latest report and past innovation studies suggest that business leaders would do well not to neglect their human capital in their obsessive focus on technology—otherwise they will likely be watching the world's transformation from the sidelines.