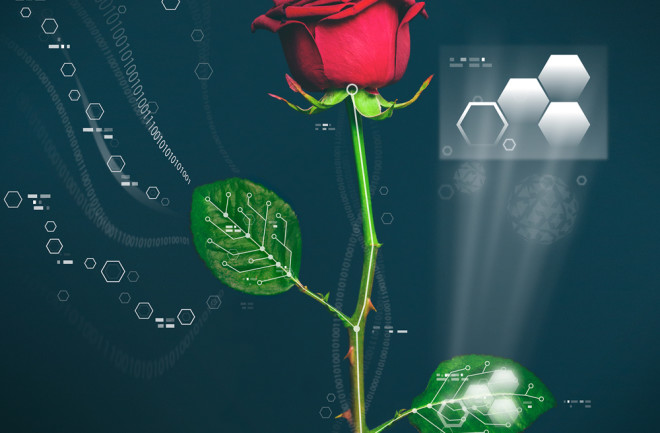 Researchers used a conductive polymer to create "wired" roses. (Credit: Linköping University) Researchers have created simple electronic components inside the stems and leaves of living roses, using the rose’s own vascular system to produce working wires and even simple display devices. By adding a specialized polymer to roses' xylem, researchers electronically "wired" roses without disrupting the plant's ability to transport water and nutrients. Though plants with built-in electronic circuitry are still in their early days of development, researchers envision a day when these cyborg plants give feedback about their health and even display that information on their leaves — like a simple screen — for farmers to read.

Swedish scientists bought freshly cut roses from the local flower shop, and put them into water that contained an electrically conductive polymer called PEDOT-S, which tends to form a gel when it's combined with water and positively charged ions. When the rose soaked up the water, it also soaked up the polymer molecules. The result was a long, thin cylinder of conductive material, several centimeters long, inside the flower’s stem. The rose’s vascular system had assembled the polymer into a wire. By connecting electrodes to the PEDOT wire in the rose’s xylem, Eleni Stavrinidou of Linköping University and her colleagues created a working electrochemical transistor — the basic components of computer chips and other electronics. Researchers claim that their success lays the groundwork for developing plants with sensors and other technology built right into their vascular systems. Filling a plant’s xylem arteries with polymer would normally be a death sentence for the plant, of course. But each branch on a rose bush has multiple xylem channels, and co-author Magnus Berggren says that the plants can survive if only some xylem channels are filled, leaving others open to transport water and nutrients. That could be accomplished by injecting PEDOT directly into the right xylem channel with a syringe, or by exposing just one part of the plant’s root system to the polymer. Berggren, Stavrinidou, and their colleagues used cut roses, not whole plants, for their demonstration, which they published in the journal

The rose with a transistor on its stem also turned the underside of a leaf into a simple display. Stavrinidou and her colleagues switched gears from the stem and infused a rose leaf with another PEDOT solution. This time, the leaf “inhaled” the solution through its stomata, or tiny structures on the surface of leaves through which a plant “breathes.” The PEDOT solution passed through the stomata and occupied empty spaces in the leaf’s mesophyll - the spongy layer in the middle of a leaf. Applying a charge to the leaf with tiny electrodes caused the PEDOT-filled compartments in the mesophyll to lighten or darken in response, and the color change was visible on the underside of the leaf. Researchers say that each compartment on the leaf works like a pixel, with the leaf’s veins as its outline. If an electrical charge is applied to one compartment, it will change color, but neighboring compartments will remain unchanged. The result is a rudimentary display device; you wouldn’t watch a high-definition movie on it, but a simple display like this could someday be paired with sensors to convey basic information about a plant’s status.

Turning a leaf into a display screen or a stem into a transistor causes part of the plant to die, but the rest of the plant could still survive, along with its new cyborg parts. Either way, MIT researcher Michael Strano says that he is excited about Stavrinidou and her colleagues’ demonstration. In his own research, Strano uses nanoparticles to affect chemical processes in plants, such as photosynthesis, and he agreed to comment on the paper, in which his work is cited. “I share their interest here in just demonstrating basic building blocks. We're kind of like building the electronic and optical Legos,” says Strano. “These simple things, these simple demonstrations - I have a transistor, I have an electrochromic device - these are the building blocks for more complex technology.” Stavrinidou and her colleagues say that technology could one day include plants with sensors built into their vascular systems to measure the plant’s levels of hormones or nutrients to gauge its health. “To generate sensor networks along the stem, two steps must be taken. First, the transistor must be manufactured exactly at the site where sensing should take place. Secondly, the transistor must also include proper receptor to make the transistor device to become a sensor,” explained Berggren. “There are several activities around the world and also in our lab to make these specific transistors becoming selective sensors for hormones and chemicals.” And sensor networks in the plant’s xylem could, perhaps, support built-in methods to regulate plants’ physiology. Internal sensors, for example, could help promote faster growth of plants used to produce pharmaceuticals. Scientists say that such tools could provide an alternative, or a useful complement, to molecular genetic modification of plants. The building blocks they’ve demonstrated could also one day be used to harvest energy from plants by converting the sugars produced by photosynthesis to usable energy, essentially using the plant as a fuel cell.