Snowflake-like robot could be used in biopsies and other procedures. 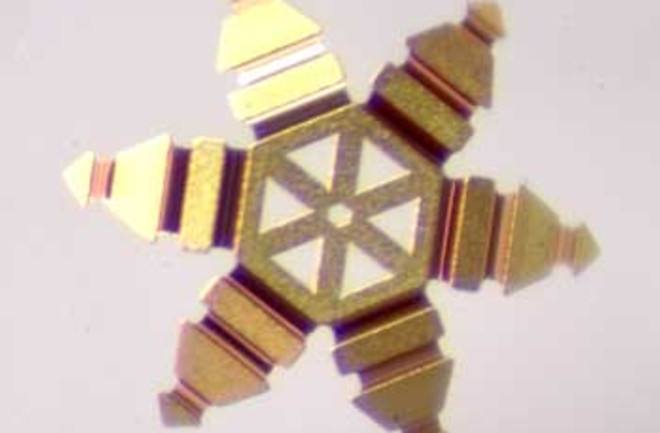 Researchers have come up with many clever concepts for micro­devices that could perform fine surgery or assemble tiny electronics. In December Johns Hopkins University chemical engineer David Gracias and colleagues announced a big but tiny breakthrough: They had developed a set of microgrippers that open and close in reaction to simple chemical changes. The minute machines are able to pick up and put down objects less than 1/500th of an inch across.

These star-shaped grippers, made of gold-coated nickel and no bigger than specks of dust, start out in water in the open position. When acetic acid—the substance that makes vinegar taste sour—is poured into the water, the grippers close to grasp a minuscule object. A magnet is used to move the grippers; then the addition of another chemical, hydrogen peroxide, prompts them to release their cargo. The researchers were able to use the grippers to grab and deliver glass beads, tiny wires, and tubes.

“We can pick up objects and place them down,” Gracias says, “so we’ve achieved the most basic function of engineering, and we’ve done so without batteries or electricity.” To eliminate the need for a human operator to move the magnet, the grippers could travel instead with the flow of a liquid. Gracias’s team is now testing human-safe chemicals that would trigger the grippers during biopsies.