This student duo thought outside the box with this creative apple and peanut butter pie. To create the ultimate peanut butter experience, the team experimented with the effect of egg white content on the texture and density of the peanut butter mousse. 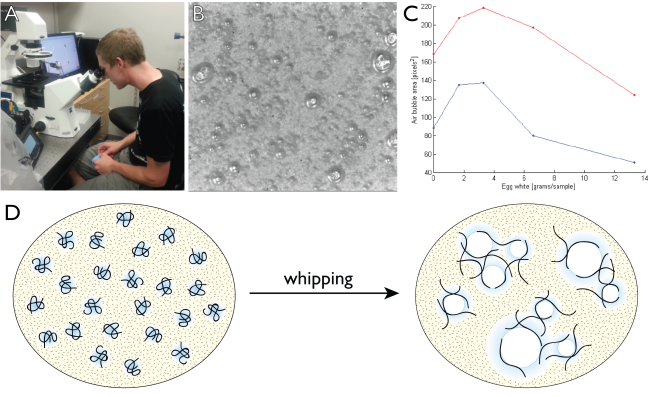 Egg white content affects mousse texture. (A, B) Team “Insert Team Name Here” visualized the air bubbles incorporated into peanut butter mousses prepared with different amounts of egg whites. (C) Using image processing techniques, they calculated the mean (red) and median (blue) air bubble areas as a function of egg white content. Their results show that there is indeed an optimal egg white content for creating an light, airy mousse. (D) An egg white is made up of many proteins suspended in water. Whipping incorporates air bubbles into the egg whites, causing the proteins to unfold as they are exposed to air. Denatured proteins [link to ceviche recipe] form networks at the liquid/air interfaces that stabilize air bubbles within the egg white foam.

1 large store-bought graham cracker crust For the apple layer: 2 tbsp unsalted butter 3 firm-textured cooking apples*, peeled, cored, and sliced ¼ cup granulated sugar 1 tsp fresh lemon juice 2 tbsp powdered sugar *Team “Insert Team Name Here” used Pink Lady and Granny Smith apples For the peanut butter mousse: 1 cup heavy cream 8 ounces cream cheese, softened 1 cup smooth peanut butter ¾ cup granulated sugar ½ cup firmly packed light brown sugar 2 tsp pure vanilla extract 2 large egg whites For the topping: 1 cup heavy cream 1 tbsp powdered sugar ½ cup finely chopped salted dry-roasted peanuts 2 graham crackers, crushed 1 1/2 tsp cinnamon To prepare the apple layer, melt the butter in a large sautée pan. Stir in the apples and granulated sugar and cook over medium heat, stirring often, until tender, about 5 minutes. Stir in the lemon juice and powdered sugar and cook, stirring, for 1 minute longer. Remove from the heat and refrigerate. To make the peanut butter cloud layer, use an electric mixer to whip the heavy cream until it holds semi-firm peaks. Cover and refrigerate. Using the mixer, beat the cream cheese and peanut butter together until smooth. Gradually beat in the sugars, then the vanilla. The mixture will be lumpy, like cookie dough. Add the whipped cream to the peanut butter mixture, slowly blending them together with the electric mixer until smooth. Clean and dry the beaters. Using a clean bowl, beat the egg whites until they hold stiff peaks. Fold the whites into the peanut butter mixture with a rubber spatula until evenly blended. Put mixture into the pie crust, cover loosely with aluminum foil and freeze for at least 5 hours. When you're ready to serve the pie, take it out of the freezer and top with the refrigerated apples. For the topping, add the powdered sugar and 1/2 teaspoon to the cream and use an immersion blender or mixer to whip. Spread over the top of the pie and sprinkle with peanuts, graham cracker crumbs, and remaining cinnamon. Recipe adapted from Cookstr: Frozen Apple and Peanut Butter Cloud Pie