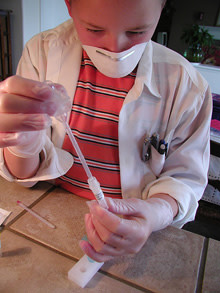 The latest in DIY involves playing around with DNA. Toying with circuit boards and Python algorithms in basements and garages is so passé. The new crop of amateur tinkerers—self-pronounced "biohackers"—are cooking up genetics experiments and trying to reprogram life itself. Could the biotech equivalent of Apple or Google, both of which were born in garages, emerge from someone's home-made lab? Meredith L. Patterson of San Francisco, who is a computer programmer by day, has set up a make-shift bio lab in her dining room. She's trying to create a genetically modified yogurt bacteria that will glow green to signal melamine contamination. She constructed a gel electrophoresis chamber for $25 and purchased some green fluorescent jellyfish protein from a bio supply company for less than $100. Step-by-step instructions for genetic transformation experiments were only a Google search away. With the relative simplicity and low-cost of basic DNA experiments, it may not be long before kids start asking for electrophoresis kits instead of microscopes. For slightly more advanced biohacking, a group in Cambridge, Massachusetts called DIYbio is planning a sort of lab co-op where just about anyone can gain access to chemicals, lab equipment, and a sub-zero freezer (from Craigslist). While the group's intentions sound worthwhile (new vaccines, super-efficient biofuels) or at least benign (fluorescent tattoos), critics see Hollywood-esque scenarios of escaped biological mutants causing deadly epidemics or environmental destruction. Related Content: DISCOVER: The Amateur Scientists Who Might Cure Cancer—From Their Basements 80beats: Work with Fluorescent Jellyfish Protein Wins Nobel Prize in Chemistry