The Amateur Scientists Who Might Cure Cancer—From Their Basements

No Ph.D.? No university lab? No federal funding? No problem. 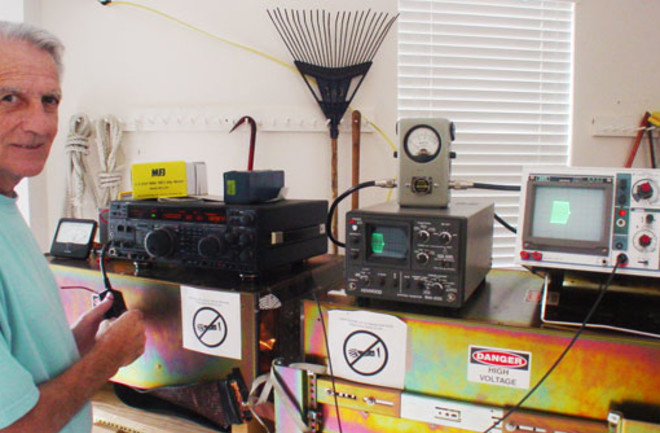 Using his wife’s pie pans and a couple of hot dogs, John Kanzius, 64, a retired business owner and radio technician, may have discovered a new treatment for some cancers. When nanoparti­cles made from gold are injected into tumors, they attach to cancer cells. The Kanzius RF Machine transmits focused radio waves to these nanoparticles, which respond by releasing heat and incinerating infected cells while leaving the surrounding healthy cells intact.

Kanzius’s research was inspired by his own struggle with chemo­therapy treatments in 2003 and 2004 while battling leukemia. In 2005 his work gained the attention of the prestigious cancer research centers at the University of Pittsburgh and the M. D. Anderson Cancer Center. Both facilities are now testing the treatment on animals. So far, tests have successfully destroyed localized tumors known as hepatic VX2 carcinomas in rabbits.

One of the last places you’d expect to find not one but two undiscovered species of plants would be right under the noses of the 7 million people living in Northern California’s Bay Area. But David Gowen, a shy retired carpenter, did exactly that. Now 62, he is the recent discoverer of two species of tiny wildflowers growing previously unnoticed just across the bay from San Francisco, Navarretia gowenii and Eriastrum sp. nov. Gowan began studying botany in his free time in 1990, teaching himself how to identify plants through the collections and expert staff at the University and Jepson Herbaria at the University of California at Berkeley.

His discoveries came about during treks through Lime Ridge Open Space, a 175-acre nature preserve near Mount Diablo. As well as giving them their formal Latin names, Gowen has dubbed the plants the Lime Ridge Navarretia and the Lime Ridge Woollystar. “I found the navarretia in 1998, but it wasn’t until 2004 that I contacted Leigh Johnson [at Brigham Young University] about the plant. The eriastrum I found in 2003.” Gowen’s first paper was published in January 2008 in the botanical journal Madroño.

There may be no amateur scientist more prolific than Forrest M. Mims III, 64, of south central Texas. He has published in major scientific journals such as Nature as well as countless general-interest publications. Mims began teaching himself science and electronics at age 11 and says he never received any formal training apart from a few introductory college courses in biology and chemistry. In 1969 he cofounded the home electronics company Micro Instrumentation and Telemetry Systems, which built what is considered by many to be the first personal computer, the Altair 8800. Mims’s research and writings span topics ranging from atmospheric aerosols to home electronics; he is probably best known for the educational electronics kits and books he has created for RadioShack, which have introduced generations of young experimenters to electronics. He is also editor of The Citizen Scientist, the online newsletter of the Society for Amateur Scientists. Today Mims devotes himself to atmospheric science; he recently finished a 265,000-word tome for the National Oceanographic and Atmospheric Administration.

The cost of equipment can be a barrier to entering science. So it is no small feat to create an inexpensive fluorescent microscope, an instrument often used by medical researchers. This is what Ely Silk, 65, a retired business owner and former IBM programmer, did in 2002 when the mercury lightbulb in his regular fluorescent microscope reached the end of its one- to two-month life span. He replaced the mercury bulb (which can cost hundreds of dollars) with a small collection of long-life LEDs emitting a variety of wavelengths. The LEDs cost only a few dollars apiece, and they eased Silk’s mind too. “I didn’t like the idea of looking through a microscope where 12 inches away from me is something that may explode,” he says. “It just made me uncomfortable.”

Silk continued to adapt the microscope so that it could, like high-end fluorescent microscopes, detect materials such as chlorophyll or fluorescent dyes, which emit light when irradiated with specific light wavelengths. The result is a microscope affordable enough for almost any high school biology lab or rural medical facility. Silk suggests that his microscope design could be used for screening patients’ sputum for tuberculosis.

Much of what we know about storms—and especially much of what we see about them on TV—comes from self-made storm chasers. Filming tornadoes up close and personal demands a love of adrenaline-pumping adventure and an intimate understanding of a twister’s cryptic workings. After nine years of running into and away from dangerous weather, storm chaser and IMAX filmmaker Sean Casey, 40, has mastered these skills and uses them to educate and entertain the public. Casey is most famous for footage that has aired on the Discovery Channel’s docudrama series Storm Chasers, which follows scientists as they deploy data-collecting probes inside tornadoes from the confines of 16,000-pound armored vehicles. But the filmmaker has been deciphering the natural world through IMAX films for some 21 years. “You have to really understand your subject matter so that you can film the more amazing parts of it,” says Casey, who has made films about volcanoes, hurricanes, earthquakes, ecology, and other subjects. “Going out with an IMAX camera,” he says, “appeals to my sense of hunting and gathering images.”

“I grew up in Alaska. My dad ran a bush airline, and if you didn’t fix it yourself, it didn’t get fixed,” says Paul Breed, 46, owner of a small software company in California. “Since that point in time I have always been a builder of things.” Breed and his son have constructed prototype lunar landers to compete in the X-Prize Foundation’s Northrop Grumman Lunar Lander Challenge, slated for late 2008. A $1 million prize will be given to the first team that can demonstrate a prototype capable of performing maneuvers that simulate ferrying a payload between the surface of the moon and lunar orbit.

Breed wants to show that small teams can build relatively inexpensive rockets—he’s doing it for less than half a million dollars. His lander design looks like the frame of a pyramid and uses hydrogen peroxide for fuel?. Breed and his son were the first team to publish online their full FAA experimental permit application, which painstakingly documents the safety of the trial, often a formidable barrier to entry. As Breed had hoped, other teams have copied their method. “This is a passion, not a moneymaking thing. If I can persuade three other people that a small team of two or three people can build serious rockets, that’s significant.”

Impacts by asteroids have transformed the course of life on Earth, most famously by wiping out the dinosaurs. Identifying craters gives important information about how often impacts occur and what their effects on Earth might be. Unfortunately, geologic changes tend to erase these craters. Ian Kluft, a 42-year-old commercial pilot, believes he has identified a previously overlooked crater in the Black Rock Desert in Nevada, famous for hosting the annual Burning Man arts and countercultural festival. Kluft’s first notion that Black Rock’s rocks were suggestive of an impact crater came during a trip there in 2003. Since then he has assembled an assortment of data supporting his idea that the remnants of an impact crater measuring 40 miles across can be found in the desert and its surroundings. Patterns in the layers and types of some rocks, as well as a series of concentric rings visible in satellite imagery, suggest a dramatic impact in the region.

Kluft began his research in earnest after finding the notations of two mining company geologists from the 1980s. “They had enough information between them that if they had even thought of it, they could have made the discovery in 1980,” Kluft says. He hopes to gather enough evidence to persuade a professional geologist to take on the quest.

Stephen Felton says snails may not look like much, but they fight mean—and they have been doing so for a long time. Some 450 million years ago, Cyclonema gastropods were attacking other snails by secreting acid onto their victims’ shells and then boring holes through them. While this mirrors the behavior of modern snails, no one knew their ancient relatives used the same strategy—until Felton came along.

For more than 40 years, Felton, 73, has been scouring the Cincinnati area’s fossil-rich geology as a pastime, assisting professional and fellow amateur geologists. A highlight of his career came in 2001 when the Paleontological Society recognized his achievements by awarding him the Harrell L. Strimple Award, which celebrates exceptional amateur paleontologists.

On 11 acres of South Carolina piedmont, a gentle slope that leads from the base of a mountain to flat land, former high school biology teacher Bill Hilton Jr., 62, runs one of the most active bird-banding centers in the Southeast. In just over 25 years he and visiting volunteers have banded more than 52,000 birds, nearly 3,900 of which are the thumb-size ruby-throated hummingbird (Archilochus colubris), at the Hilton Pond Center for Piedmont Natural History. Every year Hilton also leads expeditions of teachers and amateur scientists to Costa Rica to study and band these humming­birds in their winter grounds.

In 1996 Hilton founded Operation RubyThroat, an online database that allows citizens throughout the hummingbird’s range in North and Central America to share their observations and data. “One of the characteristics of good scientists is that they think with their pencils. They write down their observations and then share those with other people. I think the biggest sin in science is not sharing your work,” says Hilton, who publishes in scientific journals and writes a weekly online missive about research at Hilton Pond.

Operation RubyThroat had a major success this year. For the first time, a hummingbird that was banded in its tropical wintering grounds was identified in its North American breeding grounds.

Only a few years ago, detecting exoplanets—planets that orbit distant stars—was done only at professional observatories. But from his homemade backyard observatory in Northern California, Ron Bissinger, 58, leads the charge that has drawn countless amateur astronomers into the hunt for these alien worlds.

In 2001 Bissinger, the CEO of a life sciences company, teamed up with astronomers Tim Castellano of NASA’s Ames Research Center and Greg Laughlin of the University of California at Santa Cruz. Their goal was to demonstrate that amateurs could measure the tiny dip in brightness that happens when an exoplanet passes in front of its home star. The key to making this delicate measurement doable by amateurs is the availability of modern digital cameras combined with relatively small telescopes.

Bissinger continues to be at the forefront of amateur science. In the last several years he was able to confirm the existence of exoplanets HD 149026 b? (one of the smallest and densest transiting planets yet detected and also one of the hottest?) and XO-1 b (a gas giant slightly larger than Jupiter). He continues to work with professional astronomers to document even more extrasolar planets.