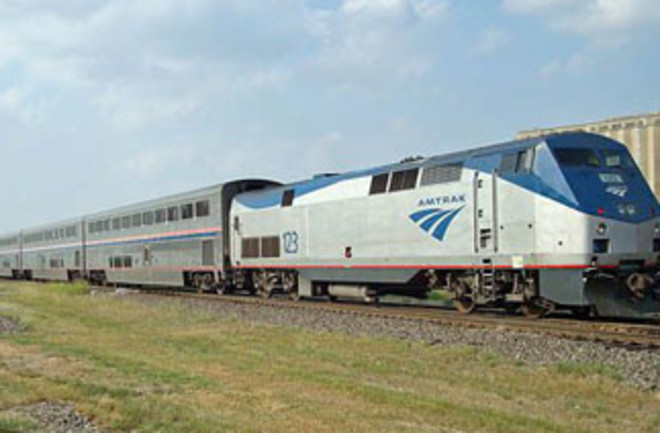 If you thought a cow was good only for its milk and meat, then we'd have you know that somewhere between Oklahoma City and Fort Worth, Texas, there is an Amtrak train chugging along on moo-power. Amtrak is currently running its Heartland Flyer train on a mix of traditional diesel fuel and biodiesel produced from cow products, in an experiment that Amtrak argues could make railroads more eco-friendly. The Heartland Flyer uses about 100,000 gallons of diesel fuel each year to move 84,000 people. For this one-year test run, Amtrak will replace 20 percent of that fuel with biodiesel, produced from tallow from Texas cows. The fat from the cattle, which is normally used to make animal feed and soap, will now instead help power a train. According to Fast Company:

Amtrak says that the cow tallow (read: rendered fat from cattle) fuel reduces hydrocarbon and carbon monoxide emissions by 10%, cuts down on particulates by 15%, and reduces sulfates by 20% compared to standard diesel.

But if the idea of whizzing across the heartland in a cow-powered train makes you uneasy, then you're not alone. The animal rights organization PETA isn't too hot on the idea either, with PETA spokesman Bruce Friedrich telling Fast Company:

"The answer to pollution is not to use the ground up remains of tortured animals for fuel. Anything using animal remains is going to be both depleting of and polluting of our environment."

Amtrak's current project is funded by a $274,000 grant from the Federal Railroad Administration. Once the train starts chugging along a regular schedule, officials will be monitoring the effects of the biodiesel on the train’s rubber gaskets and valves. Related Content: Discoblog: How Deep Fryer Grease Can Become an Energy-Saving Coating for Your Roof Discoblog: Dr. 90210 Powers SUV with Liposuctioned Fat 80beats: Highway to the Green Zone? Navy to Test a Supersonic Biofuel Jet 80beats: London’s Garbage Will Soon Fuel Some British Airways Flights 80beats: Engineered E. Coli Bacteria Produces Road-Ready DieselImage: Amtrak