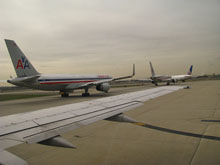 The shortest route between two points is a straight line.But if you manage to get on a flight these days, you’ll probably end up zigzagging across the skies.That’s because the radar-based navigation system used by airlines, developed more than 50 years ago, limits air traffic to a grid of narrow highways—meaning that planes have to wait in a single-file queue for their turn to take off.So it’s a good thing the FAA is proposing a new satellite-based GPS navigation system, called NextGen, that would let pilots fly shorter routes—and use less fuel.

NextGen would let pilots determine their own position and the position of other flights, potentially shifting flight patterns.The current radar system takes 10 seconds to scan an area, so planes have to be kept extra far apart. Supporters of NextGen say it would allow more planes in the air while reducing accidents and delays—while also saving 3.3 billion gallons or $10 billion per year in fuel costs.

Of course, there’s the matter of up front costs.

Switching to the new system is projected to cost $35 billion, with $15 billion to be paid for by the airlines.The airlines would have to pay an additional $200,000 per plane to install GPS devices, and the government says the system won’t be operational until the 2020s.Airlines, already beset by financial woes, are no doubt reluctant to shell out for technology that may not be of any use for many years.In the meantime, passengers will have to keep shelling out for water ($2), a pillow-and-blanket kit ($7), or a view of the sky ($15).

DISCOVER: The Physics of... Airplanes 80beats: DARPA Wants a Biofuel Jet, While Germany Works on a Hydrogen Plane 80beats: Wi-Fi in the Sky: Delta Adding Internet to All U.S. Flights