Afraid of Losing a Lady Friend? Give Her GPS Lingerie 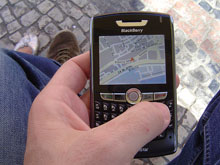 We’ve written about how GPS technology can make airports more efficient or help protect endangered elephants.Now, that same technology has turned up in a much more intimate place.In Brazil, a new line of lingerie features a built-in GPS device that allows anyone with a password to track the whereabouts of the wearer.

Lucia Lorio, the designer of the line, expects the lacey numbers to be a hit with “modern, techno-savvy woman.” It certainly would give a whole new meaning to “playing hard-to-get.”On the other hand, Lorio says the GPS-enabled lingerie could also provide a measure of protection for damsels in distress – presumably by sending for help when they're alone and in danger. We'd like to note that similar devices already exist for pets and young children in distress.

Outraged opponents, like Claudia Burghart, who leads a Berlin feminist group, call the newfangled underwear “nothing more than a chastity belt for insecure men.” Or a simple waste of technology. Or both.