A Two-Wheeled, Two-Seat, Tiny Electric People-Mover from G.M. and Segway 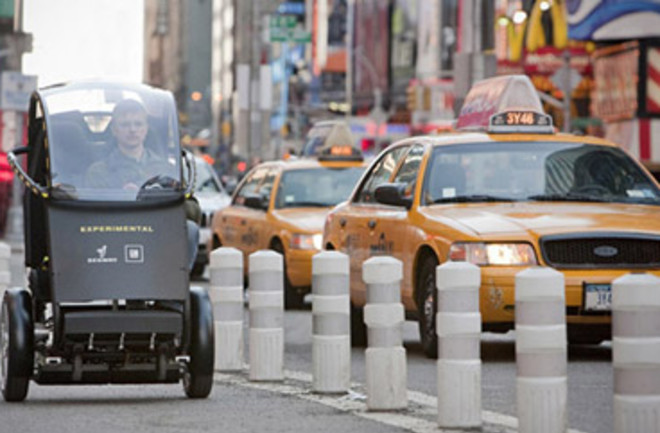 General Motors and Segway have unveiled the prototype of their new collaborative effort: a tiny electric vehicle that the companies say could, maybe, one day, revolutionize urban transportation. The two-seated, two-wheeled pod is called PUMA, which stands for Personal Urban Mobility and Accessibility. G.M. executive Larry Burns says the PUMA is part of the company's

effort to remake itself as a purveyor of fuel-efficient vehicles. If Hummer took GM to the large-vehicle extreme, Burns said, the PUMA takes GM to the other [AP].

The companies will show off the PUMA at the New York International Auto Show this week, but say there's a lot of work to be done before it will show up on city streets.

“This is a prototype, not a product,” said [James] Norrod of Segway. “We have not made a decision to commercialize it” [The New York Times blog].

But if all goes well, the PUMA could eventually be sold for between one-fourth and one-third the price of a traditional car, G.M. executives say. The PUMA's two-wheeled system uses the gyroscopic balancing technique invented for the Segway scooter, and it includes a set of "training wheels" in the front and back, which G.M. executive Chris Borroni-Bird says are helpful at stoplights.

The prototype has a top speed of 35 miles per hour and a range of 35 miles with its small lithium-ion batteries. That is enough, Borroni-Bird said, given that half of the world's population lives in urban centers, with an expected 60 percent moving into that range by 2030 [The Detroit News].

G.M.'s Larry Burns says the PUMA would have one other important innovation.

Ideally, the vehicles would also be part of a communications network that through the use of transponder and GPS technology would allow them to drive themselves. The vehicles would automatically avoid obstacles such as pedestrians and other cars and therefore never crash, Burns said [AP].

The next step for the PUMA's development is to test the prototype in the real world.

The companies hope to recruit partners, such as cities or colleges, to set up Puma travel lanes, like bicycle lanes.... Though being unveiled in New York, the Pumas might appeal most in densely packed cities in places such as India and China, Borroni-Bird says. There they would seem a big step up from bicycles. Americans, who are used to cars, might not take them as seriously [USA Today].