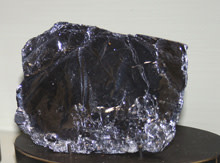 When experts talk about discarding today's silicon-based computer chips and building next-generation electronics out of new materials, they're usually talking about graphene, and for good reason--the one-atom-thick layers of carbon can behave like semiconductors and have already been used in experimental transistors. But researchers from a Swiss lab think they have a material that can trump both silicon and graphene. World, meet molybdenite. The researchers from École Polytechnique Fédérale de Lausanne (EPFL) note that the mineral looks similar to mica, and has a layered molecular structure that allows it to sheer off easily into thin sheets.

Molybdenite, the researchers said, is abundant in nature and is currently used in steel alloys and in lubricants, but it has not previously been studied for use in electronics. "It's a two-dimensional material, very thin and easy to use in nanotechnology. It has real potential in the fabrication of very small transistors, light-emitting diodes (LEDs) and solar cells," said EPFL Professor Andras Kis, adding that molybdenite (MoS2) is far more compact than silicon, while still allowing electrons to circulate freely. [PC Pro] 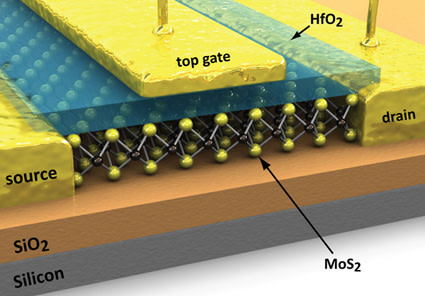 It's also a very effective semiconductor, and the paper

, published in Nature Nanotechnology, argues that it can be used to construct tiny and energy efficient electronic chips. The researchers say that the experimental transistors they made with molybdenite consumed 100,000 times less energy when in standby state than today's silicon transistors. A molybdenite transistor owes its efficiency to the material's "band gap

A semi-conductor with a "gap" must be used to turn a transistor on and off, and molybdenite's 1.8 electron-volt gap is ideal for this purpose. In solid-state physics, band theory is a way of representing the energy of electrons in a given material. In semi-conductors, electron-free spaces exist between these bands, the so-called "band gaps." If the gap is not too small or too large, certain electrons can hop across the gap. It thus offers a greater level of control over the electrical behavior of the material, which can be turned on and off easily. [press release]

That band gap gives molybdenite an advantage over graphene, which doesn't have one. While researchers have found ways to work around that problem in graphene, the molybdenite proponents say their material could spare chip-makers the hassle. Related Content: 80beats: Coming Soon to Save Moore’s Law: Memristors

80beats: Unzip a Carbon Nanotube, Get a Nanoribbon, Revolutionize Electronics?

DISCOVER: Our Brightest Hopes for Keeping Up With Moore's Law