40 Years Ago Today, the World Saw Its First Personal Computer 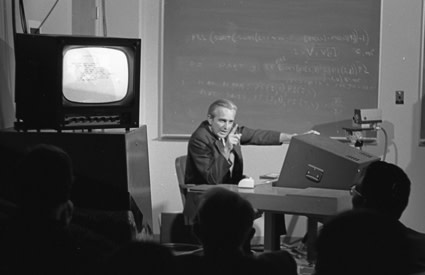 In a convention hall 40 years ago today, a computer scientist took to the stage and blew the crowd away with a couple of screens and the world's first computer mouse. In a presentation that was later dubbed the "mother of all demos," Stanford researcher Douglas Engelbart showed off his lab's research project: the first personal computer, complete with a mouse and an interactive screen.

The invention featured rudimentary windows and hyperlinks that allowed jumping from one document to another, as well as the ability to edit text and add graphics on a video monitor. The presentation also offered a peek at future computer networks that would become the Internet [San Francisco Chronicle].

At the end of the demonstration, the crowd rose in a standing ovation. Today, an event at Stanford will honor the 83-year-old Engelbart and commemorate his moment of glory.

The demo was the fruit of nearly 10 years' work into ways that computers might be used to help ordinary people work better on intellectual tasks. And by "intellectual," Engelbart wasn't thinking of analyzing data on nuclear fission experiments, he was thinking of ordinary office workers whose jobs involved writing memos, looking up information, filing things, communicating with others, persuading groups of people through presentations, and working collaboratively to solve difficult problems [Wired News].

Many historians of our young computer age have said that the demonstration gave researchers the first inkling that computers could be household objects, not just enormous number-crunching machines fed by punch cards. Despite the impact of the presentation on the assembled experts and the retroactive praise that has been heaped on Engelbart as the "Moses of computers," the device he debuted that day never caught on. The computer system, which was called the NLS, never made it out of the lab, explains Jeff Rulifson, who helped program the system's software.

"I think what happened was that Doug was very focused on extremely powerful systems for extremely highly-trained people," he said. "NLS had 500 single key commands." Learning how to use NLS was a formidable task that few took on - despite its potential [BBC News].

However, many of Engelbart's students and colleagues went on to work at Xerox Parc, another legendary technology incubator, where they contributed to projects that would lead to the personal computer revolution and the Internet. Related Content: DISCOVER: The “Father of the Internet” Would Rather You Call Him “Vint” DISCOVER: The Emoticon Turns 25 Image: SRI International