New York has a forgotten one, Texas has a $2 billion wasted one and Switzerland's building the longest. 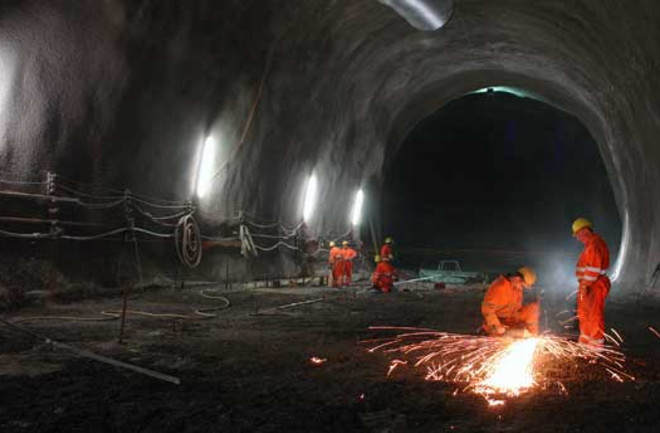 1. This month marks the 15th anniversary of the longest underwater tunnel in the world: the 31-mile Chunnel linking France and England.

2. Construction took seven years and chewed through 11 tunnel-boring machines and about $6.6 billion — 80 percent over budget.

3. Quantum bummer: In 1993, $2 billion and 14 miles in, Congress axed the Superconducting Supercollider, which was designed to create the world’s greatest particle accelerator in a 54-mile-long circular tunnel beneath Texas.

4. The Department of Energy decided to seal the tunnel, rejecting proposals to make it into a drug company distribution depot, antiterrorism training facility, cancer treatment center, or mushroom farm.

5. So that’s what they were holding out for. The abandoned collider buildings were finally put to use as the set for the sci-fi flick Universal Soldier: The Return.

6. Maybe a tunnel for people will have better luck. The Swiss are currently constructing the AlpTransit Gotthard rail link (shown above), scheduled to open in 2017.

7.  When finished, it will include the world’s single longest tunnel, 35.4 miles in length.

8. To make sure they are tunneling in the right direction, AlpTransit engineers use a gyroscope that always points north. Satellite navigation is useless underground, and magnetic compasses are not accurate enough.

9. Since the 1970s, New York City has been working on a new aqueduct system to replace its crumbling, leaking system of water tunnels.

11. New York City has so many tunnels that some get lost. What is said to be the world’s oldest subway tunnel, built in 1844, lay forgotten under Brooklyn’s Atlantic Avenue until 1979.

13. At the subatomic scale, nature makes tunnels all the time. A spooky phenomenon called quantum tunneling lets particles appear in places where they should not be, as if they had burrowed through the space in between.

14. This effect is the basis of the scanning tunneling microscope, which creates images so detailed that individual atoms can be seen.

15. Human nature makes tunnels all the time too: In 2005 federal agents shut a drug-smuggling tunnel between British Columbia and Washington State — the first one found between the United States and Canada.

16. Authorities realized something was going on when they noticed large amounts of wood and iron disappearing into the smugglers’ shed.

18. U.S. soldiers who braved the tunnels faced booby traps, including false floors above pits that had poisoned wood stakes at the bottom.

19. During World War II, American POWs tunneled out of Stalag Luft III by excavating 200 tons of sand under the noses of their captors.

20. The POWs put the sand into pouches made from old socks, then sprinkled the sand down their trouser legs as they walked around.