$10,000-Gizmo Lets You Turn Plastic Bags Back Into Petroleum 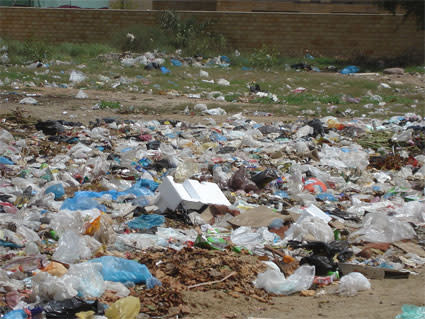 You could be spared the guilt of forgetting your eco-friendly cloth shopping bag on the trip to the grocery: A Japanese inventor has created the first home recycling system that can convert all those extra plastic bags back into oil. His name is Akinori Ito, and his invention is now for sale through Blest Corporation. According to the website, one model--the Desk-top Waste Plastic Oiling System--weighs a mere 110 pounds. But the best part is that this non-polluting conversion process is also highly efficient: two pounds of plastic can be converted into one quart of oil using a mere kilowatt-hour of energy (a cost of roughly 20 cents). It works by capturing the vapors released by heated plastic, and then funneling them through a network of pipes and water chambers, which gradually cool the vapors until they coalesce back into crude oil--where the plastics originally came from. That process creates oil that can power certain types of stoves and generators--and more refining can turn it into gasoline. But as Clean Technica duly notes:

Of course, the end product of this conversion system is still fuel that must be burned, and thus, it will give off CO2 as part of the combustion process. Still, recycling is a cornerstone of environmentalism, and such systems, if they became wide-spread, could offer a form of energy independence to consumers and seriously lessen demand for more extraction as we transition into a carbon-neutral (or “clean,” carbon-negative) energy economy.

The concept of turning plastics back into oil isn't anything new--there's a power company called Envion, in Washington, D.C., that has been making oil from waste plastic since 2009. What's new here is how this Japanese inventor has made the technology viable for the home consumer. With the United States generating 50 million tons of waste plastic every year, any further incentive to recycle plastic--albeit to make fossil fuels--qualifies as a noble endeavor. However, at $10,000, the cost of this recycling system is still a bit too steep to make much of an impact--although Ito hopes to gradually reduce the price if demand rises. In the meantime, several states give you a more prosaic option: You can bundle up your excess plastic bags and schlep them back to the grocery store for recycling. Related Content: Discoblog: Got Too Many Plastic Bags? Recycle Them Into Nanotubes Discoblog: It’s In the Bag! Teenager Wins Science Fair, Solves Massive Environmental Problem 80beats: Plastic-Loving Raptors Use Nest Decor to Advertise Their Status DISCOVER: The Dirty Truth About Plastic DISCOVER: Anything Into Oil