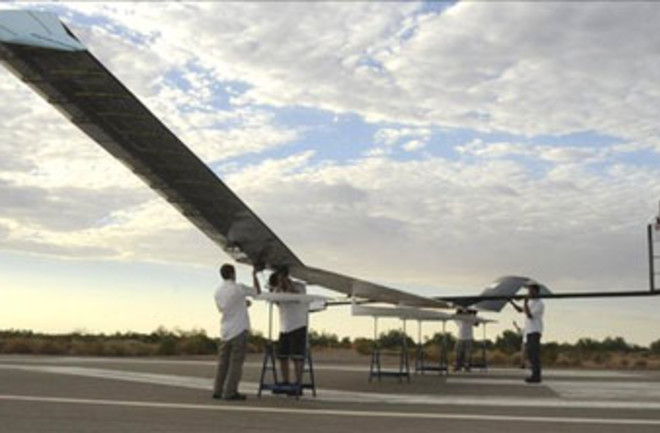 Earlier this month, we described the successful flight of Solar Impulse, a manned solar plane that flew for over 26 hours before a safe landing in Switzerland. Now comes news of another feat of solar-powered derring-do. Currently circling above Arizona, a British-built unmanned solar plane dubbed the Zephyr has now flown for a record-breaking seven days straight. Zephyr's developer, the defense company QinetiQ, hopes the plane can stay aloft and double its own record for a total of fourteen days. With a 74-foot wingspan, this latest version of the Zephyr is fifty percent bigger than its predecessors. Its designers hope that the plane will one day find use both for military reconnaissance and also for scientific research. Without a payload, it weights about 110 pounds. Says project manager Jon Saltmarsh:

"Zephyr is basically the first 'eternal aircraft.'... The launch was absolutely beautiful; it was just so smooth," said Mr Saltmarsh. "We had five people lift it above their heads, start running and it just lifted away into the sky." [BBC]

The plane is currently circling over its take-off location, a U.S. military installation called the Yuma Proving Ground in Arizona's Sonoran Desert. It uses paper-thin silicon solar arrays that cover its wings for power in the day, which also charge lithium-sulphur batteries for power when the sun goes down. QinetiQ chose this time and place for its test because the plane can soak up the sun only 32 degrees north of the Equator in the midst of summer's longer days.

The sun is tracking as nearly dead overhead as it ever does over US territory just now, meaning that the Zephyr is getting far more energy from its cells than it would farther north or at other times of year. One should note that in operational use the Zephyr will have to power a payload as well as itself--and for much of the year in many locations it will have to do this with less output from its cells than it is getting now. [The Register]