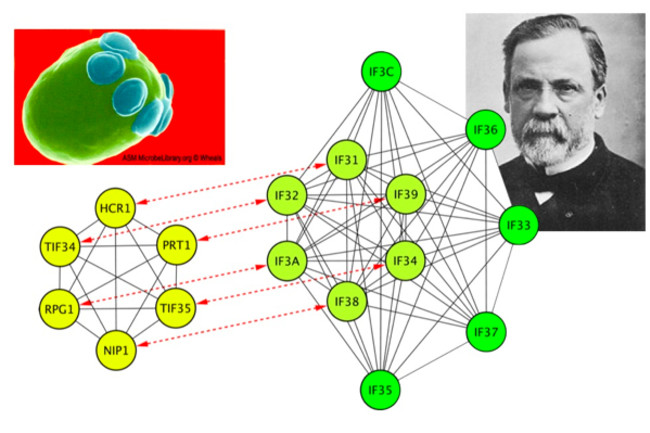 Over the weekend I came across a wonderful illustration in a new paper that I've goosed up (thanks, open access!). The subject of the paper is the way our proteins work together. Many proteins work by first joining together with other proteins to form what are known as complexes. Which naturally raises the question: how did different protein complexes evolve from common ancestors? To attack this question, Dutch researchers decided to compare two species in which protein complexes have been very carefully catalogued: yeast and humans. Yeast are fungi, and humans are animals; fungi and animals descend from a common single-celled ancestor that has been estimated to have lived 1.5 billion years ago. The Dutch researchers identified proteins in each species that descended from a single original protein in that ancestor. Then they compared how each protein interacted with all the other proteins in each species. The scientists found that many proteins in yeast and animals form identical cores of complexes. The illustration here shows the yeast and human versions of a protein complex called eIF3. These proteins join together to help in the process by which the sequence of genes are translated into new proteins. In humans, there are 11 proteins in the complex--a marvelously intricate little knot of molecules. But it would be a mistake to think that this 11-protein system could not have evolved from a simpler version. Yeast can make new proteins with an eIF3 complex made up of only 6 of the same proteins. In the lineage that led to us, this new study indicates, the eIF3 complex took on new proteins, rather than being ripped apart to form new complexes from scratch. This study joins a growing list of cases in which scientists are discovering the simple history of our complicated biology. I just happen to think this one had a very good illustrator.