A few months ago I got in my car and drove north until I reached a remarkable building filled with several million mice. At Jackson Laboratory in Bar Harbor, Maine, scientists are studying mice to understand many mysteries of genetics and medicine. But I was particularly curious about a project that they've only recently launched: an attempt to understand how many genes working together give rise to complex traits. When those complex traits go awry, the result may be a common disease such as heart disease, diabetes, or cancer. The article I wrote about what I learned, "Mendel's Mouse," appears in the May issue of Discover. Discover posted the story today on their web site, where you can read it for free here. (I've also archived it here.) Talking about this article is also a chance to add my two cents to a discussion that's been bubbling for a few weeks: the clash between bloggers and scientific journal publishers. Last month Shelley Batts at Retrospectacle wrote a post about a paper, and included a chart that appeared in it. She promptly got a letter from Wiley, the journal's publisher, menacing her with legal action unless she took the chart down. A long discussion then unfolded about fair use, a concept so mystical that I get a headache every time I try to figure out whether it applies to some text or image I'd like to use in my own work. Once the controversy reached Boing-Boing proportions, Wiley sent Batts a note telling her that it was all a big misunderstanding and that they "would typically grant permission on request in order to ensure that figures and extracts are properly credited." For us science writers, there's a huge irony to this episode. Scientific journals like attention. The better-funded ones will go to great lengths to get stories written about their papers. They offer us science writers elaborately appointed press packages offering sneak peeks at papers coming out in the near future. They sometimes give us the cell phones of the authors of those papers, in case we need to call them in the middle of the night. They give us pretty photographs to use (as long as we fairly credit them). But scientific journals also cling to conventions that block the news from spreading--particularly through the online world. Wiley, for example, initially reacted to Shelley not with enthusiasm, but with a menacing note. When Shelley responded by politely asking for permission, she was told to contact another person at Wiley. And when Wiley finally sort-of apologized, they still expected Shelley to jump through conventional hoops to get permission. All this kerfuffle over a little graph. It might have taken days to get permission to reprint it, which in the blogosphere is a geological era. Wiley was, consciously or unconsciously, going out of their way to squash interest in their papers. Compare Shelley's experience to what I'm about to do. I'm going to--shudder--reprint a diagram from a journal. Just lift it straight out. I like this diagram, because it elegantly conveys a point I tried to make in the Jackson Laboratory article, but Discover decided not to use it. So I'll use it here. We tend to think of traits as being controlled in a simple way by genes. One gene drives one trait. You sometimes hear people talking about the "gay gene," the "depression gene," and so on. But this view is almost entirely divorced from reality. The scientists at Jackson Laboratory illustrated this fact in a paper they published last summer in the journal PLOS Genetics. They looked for the genetic source of obesity in mice. They mated mice from dozens of inbred strains and then looked at later generations, meausuring variations in body weight, the size of fat pads, and other traits linked to obesity. They then pinpointed regions of the mouse genome where variations produced variations in those traits. They didn't find an obesity gene. Instead, what they found was this: 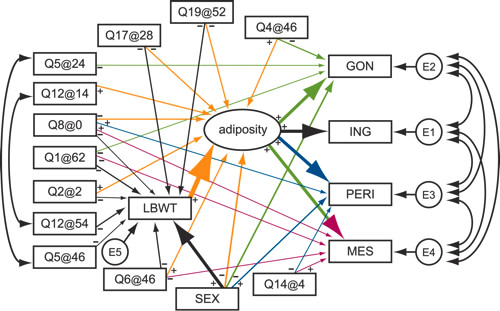 You can click on the image to go to the source, which has details about the abbreviations. But the gist of the picture is easy enough to see. Each trait is influenced by many genes, and one gene may influence more than one trait. And different traits influence each other. And those influences can be positive or negative. This, I suspect, is what genetics is going to look like in the coming century. And what do I now hear from PLOS? Do I hear the grinding of lawyerly knives? No. I hear the blissful silence of Open Access, a slowly-spreading trend in the journal world. PLOS makes it very clear on their web site that "everything we publish is freely available online throughout the world, for you to read, download, copy, distribute, and use (with attribution) any way you wish." No muss, no fuss. If I want to blog about this paper right now, I can grab a relevant image right now from it. In fact, I just did. I certainly appreciate the importance of copyrights (as the owner of many for my articles and books), but in these situations, keeping information behind a thick wall starts to seem a bit crazy, like the loss of precious bodily fluids. Far from committing some sort of violation to the PLOS paper, I have actually just spread the word about it. A few readers may even go back to read the original. And it was so easy and straightforward for me to do so that I will be very reluctant to bother with anything else. Update: 5/24: Discover link fixed.