Burdened with the mantle of greatness. 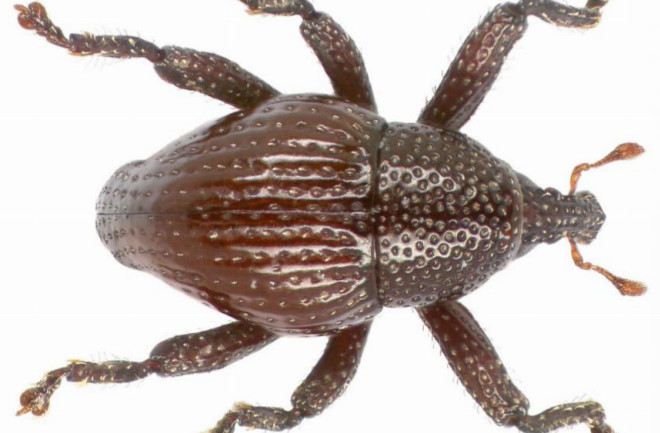 Today I'm going to tell you about a weevil. There are a lot of weevils, and beetles in general, out there, but this one is special. Plucked from anonymity, this little guy was blessed, or cursed perhaps, with the mantle of greatness.

Trigonopterus attenboroughi hails from the Indonesian islands of Java, Bali and Lombok, and it was discovered in 2014 by German researcher Alex Riedel. Discovering new species can take a lot of hard work, but it seems that all Riedel had to do was walk into the forest and pick a random sampling of weevils off trees. When he analyzed DNA from the insects he'd found, it turned out that 98 of the 99 species were brand new.

Ninety-seven of the species were rather boringly named after numbers or where they were found, but one species was destined to be elevated above its humble station by a seemingly random act.

Riedel doesn't say why he picked this particular weevil from among the others to bear such an auspicious moniker, and I suspect it doesn't really matter. After all, what force compels a researcher's hand to pluck 98 new species from among the dense forest greenery, or guides a young lad from Isleworth to become the world's most beloved broadcaster? Call it fate, call it chance, the world moves on either way.

Though it didn't ask for it, T. attenboroughi is now enshrined in the annals of scientific record, and the marginally more porous record of popular culture, as David Attenborough's weevil.

In any case, the name is fitting to a degree. The weevil inhabits a section of rain forest in considerable need of protection, given the fact that weevils don't inhabit new territory very easily. If invoking the name of a man synonymous with the abundant beauty of the natural world helps protect even a tiny portion of it, I'd say this weevil's destiny has been fulfilled.

All 98 new species of weevil. Can you find the one named after David Attenborough? Hint: It's got six legs. (Credit: Alexander Riedel)

Bonus Attenborough Fact of the Week:  David Attenborough left his job as director of programs at the BBC so he could continue hosting nature documentaries.