The vanguard of viviparity. 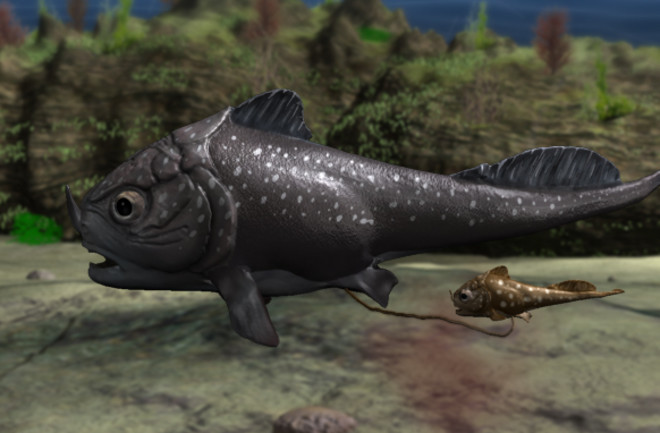 I mean, really. No matter how you feel about the man, surely his mother is off-limits?

Translated from the Latin, the full name of this species comes out to be "Attenborough's mother fish." Where I come from, them's fightin' words.

But the name is quite accurate. Hot takes aside, the fossil of Materpiscis attenboroughi actually turns out to contain the oldest vertebrate pregnancy we've ever found. It sets in stone the ancient roots of live birth, and the "mother fish" appellation honors the species' status at the vanguard of viviparity.

The discovery, which came in 2005 in Australia's Gogo formation, pushed back the concept of live birth to about 380 million years ago — 200 million years older than what was assumed before, according to the BBC. And in a fish, no less.

That makes M. attenboroughi, named in a 2008 paper in Nature, similar to sharks today, at least in terms of gestation. The fish were also among the first to have jawbones, and are most visually striking for their abnormally large eyes — one can only imagine how cute that baby would have been.

We know about this prehistoric pregnancy only because of a bit of archaeological luck — the one fossil of M. attenboroughi we've ever found (not including the baby, I suppose) just happened to have been with child when it died and fell into soft sediments. Well, a tragedy at the time, but great news now!

The specimen was so well preserved that it retained its three-dimensional shape, and looking inside, researchers could discern the skeleton of a tiny baby fish, umbilical cord still attached, as well as what they think is a yolk sac.

What's more, it makes M. attenboroughi the first species we know of to engage in "the fun kind of sex," as author Jonathan Balcombe so delicately puts it. Internal gestation most often requires internal fertilization — you do the math.

He goes on to quote Attenborough's response to the honor: "This is the first known example of any vertebrate copulating in the history of life ... and he goes and names it after me."

Sir David Attenborough with a 3-D model of his fish. He was "thrilled to the marrow," he said. (Credit: Western Australian Museum)

The species was actually named after David Attenborough to honor his work in the 1970s calling attention to the Gogo Formation, and the many fossilized wonders it held. Little did he know, his very own mother fish was waiting inside.

Bonus Attenborough Fact of the Week: All the cool kids are going to David Attenborough-themed dance parties.