A humble "thank you." 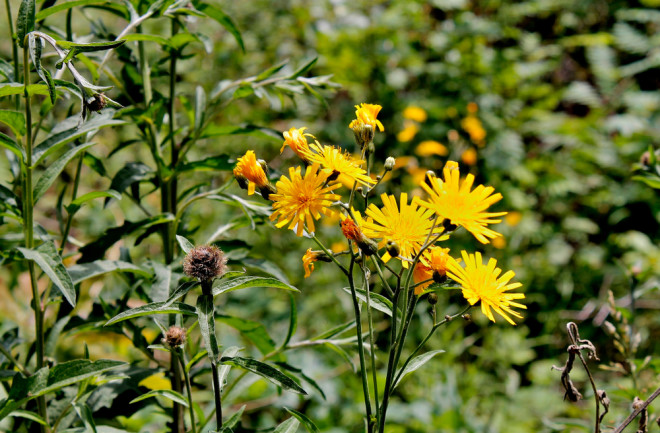 It can be hard to say "thank you." Shyness, stubbornness and the fear of opening ourselves up to another can strangle those two words to silence in our mouths. Gratitude is especially hard to convey when you're trying to thank a famous broadcaster for starting you on your scientific journey.

At the core of most of these species we've featured, these "Attenboroughs," is a humble message of thanks, given in the best way a researcher knows how.

Attenborough's hawkweed, Hieracium attenboroughianum, is plant taxonomist Tim Rich's gift to David Attenborough. He found it on Cribyn, a mountain in the charmingly-named Brecon Beacons in Wales. About 300 of the flowering plants huddle on mountainside ledges there, and they adorn the slopes with color for a brief time in early summer as they burst into bloom.

Said Rich of his discovery, speaking to The Guardian: "I decided to name this special little plant after David Attenborough as he inspired me to study ecology when I was 17. This is a personal thank you for the years of fascination he has given me going to different places to search for new things."

There are thousands of species and sub-species of hawkweed, and in some places in the U.S. it's considered to be an invasive pest.

In Wales, though, on the island where Sir David Attenborough was born, his namesake lives peacefully among gently curving mountain slopes, sprouting, reproducing and dying in a simple rhythm.

H. attenboroughianum there, in fact, might be considered but one single organism, stamped out hundreds of times. Hawkweeds reproduce asexually by cloning, dropping seeds that are near-perfect genetic copies of themselves. Imagine hundreds of Attenboroughs, swaying in the breeze.

The species was marked as "endangered" at the time of its scientific description, likely because it numbers so few. But the remote location affords some protection, and they'll hopefully endure for the time being.

Has David Attenborough hiked into the Brecon Beacons, so near his home, and perhaps his heart, to view for himself this living embodiment of gratitude? We'll have to imagine.