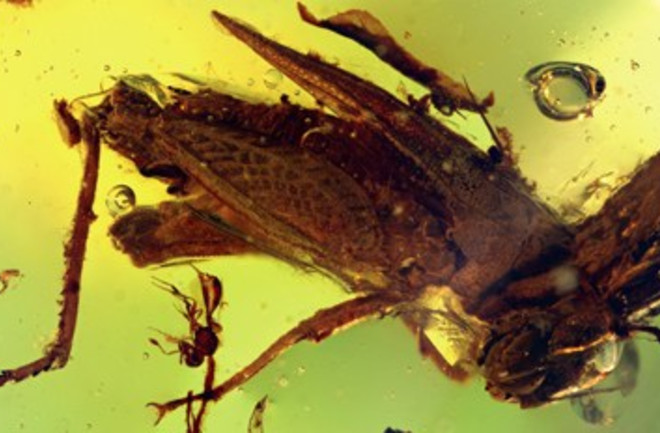 Last week I waxed mildly poetic on the ephemeral nature of living beings and the inorganic reality of a fossil. Fossils are just shadows, I said, or memories ... or something like that.

Well, this week I've got something much more exciting and less poetic. It's an ancient pygmy grasshopper, Electrotettix attenboroughi, and it's no rocky fossil, no sir.

This is a genuine, mint condition, honest-to-God organic grasshopper, encased in a shiny amber shell and preserved for something like 20 million years.

We've all seen Jurassic Park, so I'll skip the whole explanation (and requisite caveats about why THAT won't happen anytime soon), but suffice to say, this grasshopper is looking pretty good. Eyes, wings, antennae, it's all there, looking not a day older than when this unfortunate insect was consumed by smothering sap and molded into an eternal statue.

The wings are especially interesting, partly because they're so puny, and mostly because they're there at all. Members of this group today don't actually have wings, and it appears that E. attenboroughi happens to come from the sliver of time when the feature was gradually disappearing but not quite gone yet.

What made these particular grasshoppers abandon the aerial life isn't really known, but it seems that Attenborough's grasshopper got dealt a particularly bad hand — it had to carry around a pair of wings its whole life, and it never even got to use them for anything.

The piece of amber E. attenboroughi sits in was collected in the Dominican Republic over 50 years ago as part of a huge haul. There was so much, in fact, that the fossil sat in a five-gallon drum for most of that time until Sam Heads, a paleontologist at the Illinois Natural History Survey, began combing through the collection.

He discovered the grasshopper, along with a trove of other fossils he's still analyzing and categorizing, at the University of Illinois. It's not an uncommon problem for biologists. Field researchers actually have it much easier — all they have to do is gather up samples, stuff them in a box and ship them back to the lab.

The painstaking work of actually identifying what's been collected can take years, and there are backlogs of samples all across the country awaiting the tender ministrations of an enterprising anatomist.

We've likely already got thousands of new species in hand, we just don't know it yet. David Attenborough has actually done a whole series on creatures trapped in amber, called "The Amber Time Machine."

It's based on a piece of amber the naturalist received as a young boy containing a menagerie of ancient creatures, and it's a fitting tribute to the preservative power of tree gunk.

Bonus Attenborough Fact of the Week: David Attenborough's brother, Richard Attenborough, knew a thing or two about amber himself. He played John Hammond, the owner of Jurassic Park, in the movie series.