"Inspired by the sleek, hydrodynamic properties of sharkskin," Speedo claims, its Fastskin FSII swimwear mimics the texture of a shark to reduce drag and make you faster. But the material might work better if you wore it inside-out. And a closer look at the shark itself reveals engineering features that put our technology to shame.

Calling the suit--or the shark--"sleek" is a little misleading. A shark's skin is covered in miniature teeth called denticles (in case you thought sharks weren't toothy enough). The denticles themselves have ridges that run parallel to the line of the shark's body. To see what these tiny ridged teeth are or aren't doing, researchers at Harvard assembled some robotic sharkskin sandwiches.

Johannes Oeffner and George V. Lauder tested fresh pieces of skin from two kinds of sharks, the porbeagle and shortfin mako; a ribbed silicone material; and Speedo's Fastskin FSII fabric. They glued pairs of sharkskin pieces together sandwich-style to make flat rectangles of skin. With the silicone and Speedo pieces, they made both normal and inside-out sandwiches (with the textured surface on the inside).

These rectangles of skin, rubber, or swimsuit were tested with a kind of robotic swimming machine. The device dangles a rectangle of material in a current of water, waving it back and forth like an undulating 2D fish. Outside the water tank, the device floats on something "rather like an expensive air hockey table," George Lauder explains. This lets the robot propel itself: It may outswim the current, fall behind, or keep up like a person on a treadmill. It also lets the researchers see just how fast each material can swim on its own.

The sharkskin rectangles propelled themselves through the water significantly more quickly when they were intact than when they had their denticles scraped off, suggesting that the little teeth do aid in swimming speed. The rectangles made of ribbed silicone also swam faster when they were right-side-out than smooth-side-out.

But the Speedo Fastskin sandwiches were not so fast. They actually propelled themselves more quickly through the water when they were turned inside-out. That highly engineered fabric surface made the robot swim "quite a bit slower," Lauder says.

When viewed at a microscopic level, it's pretty clear why the Speedo performed differently from the real sharkskin. 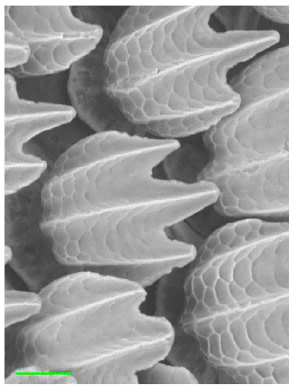 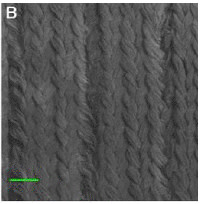 Each of the shark's denticles (left) has three pronounced ridges. The imitation of this ridged pattern is presumably what helped the ribbed silicone rectangles swim faster, even though the sharkskin as a whole doesn't really have a ridged pattern. The Speedo fabric (right) doesn't have pronounced ridges at all, but does have occasional grooves--you can see these as the darker stripes in the material.

When it comes to lessening drag, it seems Speedo's sharkskin impression is a bust. But the shark is only getting started. Those tiny teeth have another speed-enhancing trick besides reducing drag: They actually increase thrust, helping to propel the shark forward through the water.

Oeffner and Lauder discovered this by tracking the flow of water around their flapping robot. What they saw was a vortex--a little whirlpool of water--forming near the leading edge of the flapping sharkskin. "Insects and birds form these on their wings in flight," Lauder says. Comparing the intact sharkskin to the skin that had its denticles sanded off, the researchers saw that the toothed skin enhanced this vortex and held it closer. The low-pressure vortex helps to suck the sharkskin forward through the water.

(To make sure the flapping of the sharkskin wasn't too exaggerated compared to the motion of a real shark swimming, the researchers observed live sharks called spiny dogfish. These sharks had been trained to swim steadily in a flow tank, like a human in one of those Endless Pools. The sharkskin sandwiches, according to their measurements, did curve back and forth comparably to a real shark.)

Even though the Speedo Fastskin FSII material didn't show any signs of inherent fastness (and seemed to actually increase drag, compared to when it was turned smooth-side-out), that doesn't discount the Speedo swimsuit as a whole. Fastskin suits compress an athlete's body, making it more streamlined. Panels of material squeeze the body into a shape that's, according to the company, more efficient for swimming. And the newest designs, which use a different fabric than the one tested here, even come with a corresponding Fastkin swim cap "designed using global head scanning data."

The mental game may be just as important to athletes as the physical one. And when it comes to confidence, a swimsuit that's marketed to make you feel like a top predator can't hurt. (The sharks themselves, one assumes, don't need any such ego boost.)