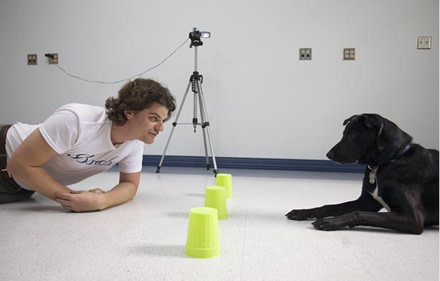 Recently I took a trip down to North Carolina to spend some time with Brian Hare, an anthropologist at Duke University who wants to understand how human nature evolved. While Hare spends a lot of time in Africa studying chimpanzees and bonobos, he also studies dogs. The social intelligence of dogs is not just interesting in itself, but also for the clues it offers about how we evolved. It's possible that wolves became dogs in much the same way our chimp-like ancestors became human. In the newest issue of Time, I've written a feature about canine cognition, and scientists like Hare who are trying to plumb its depths. Check it out. (And be sure to also check out the photoessay of Hare's new Center for Canine Cognition at Duke, from which this picture comes.)