Your Cat Might Tolerate Other Felines, But They Still Consider Them Outsiders

New research identifies hormones that might make cats more social. But oxytocin, the “hug hormone,” isn’t one of them. 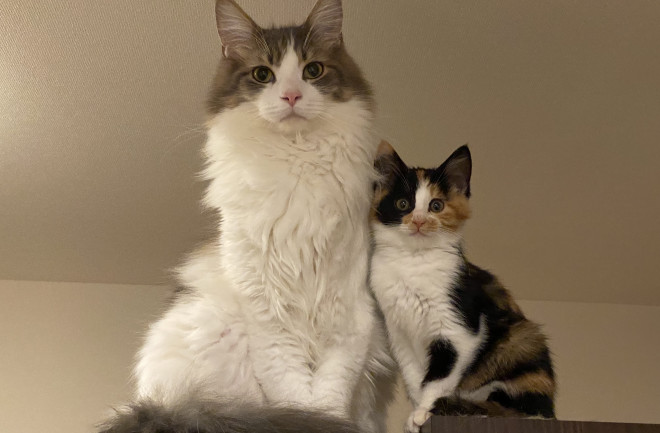 Oxytocin forges social bonds. Affectionately called the “cuddle hormone,” it ties human mothers to their babies and dogs to their owners. But new research finds an unexpected trend in cats: Those with more oxytocin interact less with other felines.

“Cats may not consider other individuals living in the same space as tight relationship group-mates,” the authors say in a press release.

Most wild cats live alone, but domesticated ones today tolerate group living. Hormonal changes could help cats adjust to communal life, for example by reducing cortisol and testosterone which control aggression and increasing oxytocin which builds social bonds. The researchers tested how each of these hormones correlated with cat social behavior.

The team formed three cat groups, each with five individuals, and monitored their interactions for two weeks. Then, they measured cortisol, testosterone and oxytocin from their urine.

Cats with low levels of cortisol and testosterone tolerated group-living. They played, shared and sniffed more frequently, and they rarely tried to escape. That was no shock, since those hormones initiate fear and aggressive responses towards threats.

But the surprise came when they tested oxytocin. The cats with the most “cuddle hormone” played and shared the least. The finding, the team says, means that cats might not view their neighbors as groupmates.

Oxytocin links in-groups, but it also excludes out-groups. In humans, for example, oxytocin can compel us to exclude and exploit outsiders from rival groups in artificial games. Similar trends arise in wild chimpanzees: They increase oxytocin during and after combat with other groups of chimps.

Even across species, animals with tight social networks use oxytocin to bond while those that are less socially tolerant don’t. For example, bonobos are the “make love, not war” apes known for congenial bonds, while chimpanzees are the opposite. In a previous study, when researchers gave oxytocin to bonobos, they made more eye contact with each other. But when they did the same to chimps, they averted their gaze.

Read more: Has Science Found a Way to End All Wars?

Similarly, previous research showed that dogs given oxytocin tend to approach and affiliate more with other dogs. Cats, then, might be more like chimps, while dogs are more like bonobos.

The researchers admit that the study is limited. The small sample size, short, two-week time period and observational design can’t tease apart causality. Cats with lower cortisol might have naturally interacted more with others, or cats that interacted with others could have decreased their cortisol levels. What’s more, the tabbies used in the study were on average already four years old. Most social bonding in cats happens as kittens, and the team could have missed the early stages of life where oxytocin could matter.

For now, though, it seems like domestication corralled felines into communal living. But they’re still more solitary than they are social. Cats just don’t see each other as groupmates the way that dogs, bonobos and people do.